Digital logs produced by smartphone, tablet or computer apps no longer have to be printed and signed manually by drivers, according to new guidance on digital logs issued this week by the Federal Motor Carrier Safety Administration. Digital logs can now be signed with electronic signatures and submitted to carriers to satisfy federal logbook requirements, FMCSA’s guidance says.

Under the new guidance, if a driver can sign the logs electronically, they do not have to print logs each day and do not have to maintain printed and signed logs for the previous seven days.

From an enforcement standpoint, drivers can display current and records of duty status for the previous seven days on their device’s screen. If an inspector asks for printed copies, drivers must be given the opportunity to print them during the inspection, FMCSA says.

If electronic signatures cannot be used within the app, though, drivers must still print and sign their logs each day and have on them printed and signed records of duty status for the preceding seven days.

The agency’s guidance here refers exclusively to apps or other software that are not integrally synchronized with a truck’s operations (like electronic logging devices and their predecessors, automatic onboard recorders) and require drivers to change their duty status manually.

According to the agency’s guidance, simple digital logs, like in smartphone apps, do not count as electronic logging devices or automatic onboard recorders, as they do not connect with the truck’s engine or computer to gauge operations like power status, motion status, engine hours, etc. 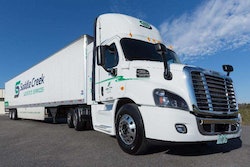