Steve Sashihara sees disruption coming from high-tech firms outside the trucking industry, but he would rather it come from within.

“We’ve got to get our analytics and automation game up. Otherwise if we keep trying to save a penny here or there we are going to get swept up,” said Sashihara at the CCJ Spring Symposium, May 24, in Asheville, N.C.

Sashihara is co-founder and CEO of Princeton Consultants, a technology and management consulting firm for companies in the $1.5 trillion transportation and logistics industry.

Hotel and taxi industries refused to see the startups Airbnb and Uber as credible threats, he said, and now well-funded Silicon Valley firms have their sights on the trucking industry.

They see an opportunity to capture a share of the $700 billion spent on trucking annually by using on-demand freight models that “radically disintermediate” transactions. The new high-tech freight models are often referred to as “Uberization” of the trucking industry. Their goal is to compress and automate the various touch points for moving loads through the supply chain.

Co-presenter Scott Perry described how Ryder Systems is working on products in areas that are disruptive. Perry is the chief technology and procurement officer of Ryder’s global fleet management solutions.

The diversified equipment leasing, 3PL and freight management company expects to surpass $7 billion in revenue this year, he said, and strategically focus on solutions in: 1) e-commerce and final-mile; 2) big data and connectivity; 3) next generation vehicles; and 4) asset sharing

“All are connected and build on each other,” he said. “As we see the solutions maturing we will be bringing new products to market.”

Perry described a new customer service tool, Ryder NaviShare, that shippers can use to gain real-time visibility of data for loads pulled by private and for-hire fleets as well as the loads they outsource to third-party logistics firms.

The cloud-based NaviShare platform includes a dashboard for visibility to metrics for on-time performance, load tracking and validation, and more. The platform’s data sharing and freight visibility tools lay a foundation for future on-demand freight matching and asset sharing, he said.

Sashihara showed results from a recent survey of shippers and carriers that asked where transportation and logistics could be disrupted in the next seven years. In the survey, 45 percent of respondents were carriers and 23 percent shippers.

Fifty-seven percent expect the impact from radical disintermediation will be moderate to large. Nearly all agree the Internet of Things, big data and artificial intelligence, visibility, exception management and real-time routing will impact the industry.

Sashihara noted 56 percent of companies surveyed are unclear as to how they can meet and harness these new market forces.

“They are not really taking action on this,” he said, and recommended that all companies focus on improving user-friendly automation in ways that reduce emails, phone calls and paper forms for their customers.

Scott Perry wondered if transportation and logistics providers that have been successful in the past will be able to close the technology gap with high-tech Silicon Valley firms, “or are they so embedded that they won’t be able to make that step?” asked Perry.

Sashihara agreed that change is difficult but necessary for traditional players.

“What makes you successful on the way up makes you risk adverse when you are on top,” he said. “Taxi companies were capable of disrupting their own industry but they didn’t.”

Looking to the future, Perry sees a day when the trucking industry will go beyond using logging devices for hours-of-service records. Drivers could use wearable devices as small as a ring on their finger to monitor how much time they actually spent sleeping while off duty.

“The device you are wearing could say, ‘You’ve pushed it too hard. You are only capable of operating 6 hours,’” he said.

How your fleet can reach Millennial drivers 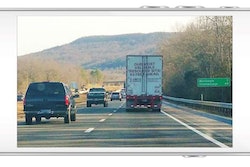