The Trucking Alliance, a coalition of some of the country’s largest trucking companies, is pressing Congress to require applicants for truck driving jobs to be screened for drug use via hair sample test, rather than the current urine test requirement.

The group says hair sample tests are more reliable in determining whether a driver applicant has used illegal drugs recently. The Alliance says more stringent requirements are needed in light of the increasing use of addictive opioids. Opioid use cannot be detected in a urine test only after a few hours, the Alliance says, whereas hair screening can detect opioid use from the prior 90 days.

Kidd says that, since 2006, J.B. Hunt has turned away more than 5,000 driver applicants who failed a hair sample test after passing a urine sample test. These drivers likely found jobs at other trucking companies, Kidd says, since most companies only use urine analysis tests. “Multiply this company’s experience by the hundreds of thousands of truck driver applicants each year across the United States, and we have a major problem,” said Kidd.

The Alliance announced the initiative late last month at the United Nations at an event meant to highlight Brazil’s successful initiatives in screening workers in safety sensitive positions for use of opioids and other drugs.

The U.S. DOT last year added four common opioids — hydrocodone, hydromorphone, oxymorphone, and oxycodone — to its drug-testing panel for truck operators. However, the Alliance says, unless those drugs were used within the hours prior to providing a urine sample, their use would likely go unnoticed.

The Trucking Alliance in 2016 petitioned FMCSA to proceed with a rule without the HHS guidelines in place. Congress required HHS to develop the guidelines within a year of the FAST Act’s passage, by December 2016. But the guidelines still haven’t been developed, and HHS has not provided a timeline for when it plans to issue them. 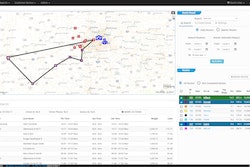 Service over profits: fleets use different metrics in final-mile transport