Complying with an order from Congress issued in 2015, the Federal Motor Carrier Safety Administration has released a report on how it plans to proceed in reforming its Compliance, Safety, Accountability program to better achieve CSA’s goal of identifying unsafe trucking companies.

The chief reforms outlined in the 10-page report include replacing the existing CSA Safety Measurement System with a new scoring system, working to improve the quality of data used to score carriers, making it easier for carriers to understand and calculate their safety scores and evaluating adding an absolute scoring system (instead of relying only on relative scores that hinge on a comparison of carriers to their peers.)

The agency says it hopes to begin testing a new scoring calculation method on “a small scale model” by September, with a full-scale model test to potentially follow in April 2019. The changes to calculating scores would be the largest reform made to the program. The new scoring system would be based on a so-called “item response theory” method, which was recommended to the agency as holding the potential to account for variables (such as violations and severity weights) better than the previous scoring model used by the agency.

The report, dubbed by the agency and Congress as a “corrective action plan,” is dated June 2018, and it was posted to the agency’s website July 4, according to a timestamp on the page. The FAST Act highway bill, signed into law by President Obama in December 2015, required FMCSA to pull its SMS percentile rankings from public view and required the agency, with the help of the National Academies of Science, to figure out how to make the program more accurate in its assessment of motor carriers’ safety. Congress required the agency to submit a plan on how it would shore up the program following widespread concern among carriers that the scores were unfair and inaccurate and relied on shoddy data.

Last week, the agency announced it was scrapping CSA reforms proposed in 2015 in favor of broader reforms outlined by the National Academies of Science. Even before last week’s announcement, however, the agency had posted its corrective action plan on an interior page within its website, though it did little to publicize the report.

The National Academies of Science issued its CSA study report last June, noting CSA’s deficiencies and ways the agency could alter the system to make it more fair and more accurate.

FMCSA in its report mostly follows NAS’ recommendations. In addition to moving to the item response theory scoring model to calculate carriers’ safety ratings, the agency says it intends to work with states and carriers themselves to fill the void of data on vehicle miles traveled and crashes — both of which were identified by NAS as large deficiencies within the data well mined by FMCSA for use in CSA’s Safety Measurement System.

To improve the program’s transparency and help carriers better understand their scores, FMCSA says in the report it plans as a “first effort…to improve data availability [and] develop a webpage where researchers, carriers, safety consultants and the public can obtain simplified MCMIS (Motor Carrier Management Information System) data snapshots.”

Lastly, FMCSA says it will evaluate the ability to add an absolute scoring component— that is, rating carriers based solely on their data — to the system. The current CSA program uses relative scoring – carrier-to-carrier comparisons — to target carriers for compliance reviews. “At this time, it is not known how [absolute measures] would be affected once the agency completes the modeling recommended by NAS,” FMCSA says in its report. “Therefore, FMCSA defers action on this recommendation until it is confirmed that this would be relevant.” 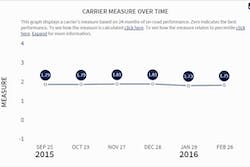