The Federal Motor Carrier Safety Administration is currently in the process of sorting through the more than 5,100 comments filed on its advanced notice of proposed rulemaking — the first phase of a potential review of hours of service regulations that govern truck drivers’ work schedules — and is deciding whether it will proceed with a proposal to overhaul those regs, says Joe DeLorenzo, FMCSA’s director of enforcement and compliance.

He also said, as reported by CCJ previously, that FMCSA Administrator Ray Martinez hopes to move quickly within the regulatory process regarding hours of service reforms.

“The next step is the decision point – do we have enough to move forward?” he said. “If we decide it’s yes, the next document that everybody sees is an actual proposal. … I can’t give you a day or a time or a month – the administrator has said he wants this done as quickly as possible. A lot of people are working very hard, and once that decision is made, then a more formal schedule will be out there.”

DeLorenzo spoke on a conference call last week with about 10 few owner-operators and small fleet owners, about the impending decision on hours of service reform. FMCSA enforcement chief Bill Mahorney was also on the call.

In response to a question about timing for the agency’s decision, with a March time frame specifically referenced, DeLorenzo said the agency should know more by spring.  “I think that process-wise, by the Spring, we should have a good feeling for where things are. It’s a little early to say. I think I’ll have a better feel for it once we’ve gone through those comments” on the agency’s Advance Notice of Proposed Rulemaking asking for comments “and figured out where everything is.”

Read more on this at CCJ sister site Overdrive. 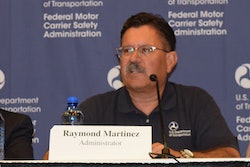