Not playing around: Proper wheel end play the difference in bearing life and loose wheels

The wheel end is the heart of the axle and its margin for error in setting end play – how loosely or tightly the bearings sit inside the hub – is thinner than a sheet of paper.

The Technology & Maintenance Council Recommended Practice 618B suggests .001 to .005 inches of end play, with a goal of trying to get as close to either number as possible. A sheet of paper is roughly .004 inch.

Among the benefits of manually adjusting wheel bearings is the confidence of knowing the wheel end is within the TMC recommended specification, “assuming the technician concludes the installation with a dial indication to confirm end play,” said Stemco Wheel End Product Manager Vincent Purvis.

Properly checking end play requires removing the hub cap or axle, which TravelCenters of America Director of Technical Service Homer Hogg said might not always make the most sense every time you raise the wheel end, “but you can certainly spin the assembly and check for roughness,” he added. “You can also try to push in on the top of the wheel to see if there is any movement.”

An experienced technician, Hogg said, should know how to tap the assembly in the right locations and to hear and feel a loose wheel bearing, “but remember that the best way to check it is with a dial indicator.”

Timken notes that attempting to set preload (eliminating axial clearance) in a traditional wheel end depends on the quality of all the components and the skill of the technician to get it correct every time.

However, pre-adjusted wheel ends can offer a more predicable and middle-ground type of consistency – neither too tight nor too loose – and they only need to be torqued to a manufacturer’s spec. It’s less likely they are adjusted incorrectly.

Pre-adjusted wheel end systems are intended to be locked down 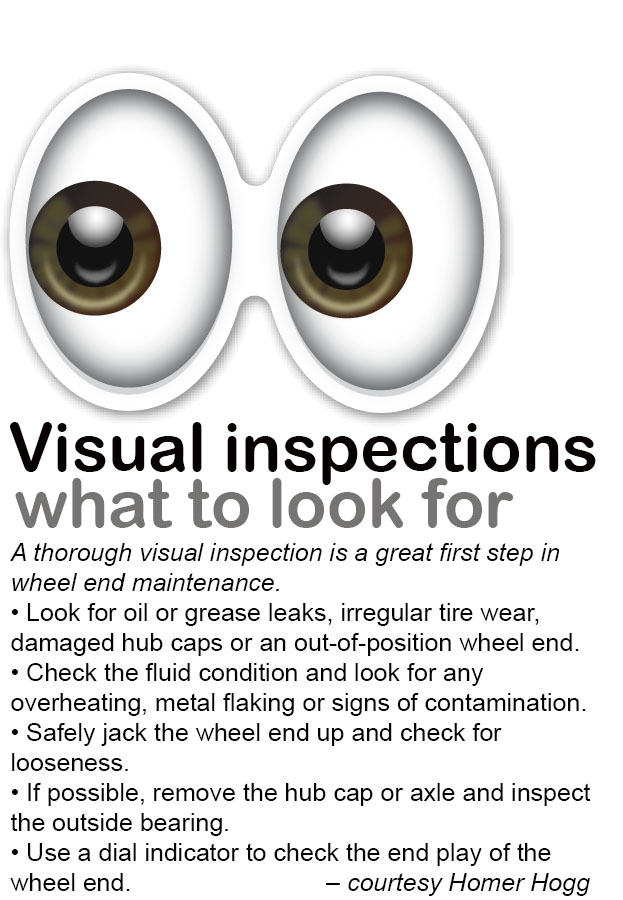 and secured based on the tolerance stack ups of components inside the system. Purvis said this stack up commonly puts the wheel end into preload, which is not measurable when the wheel end is installed on the axle.

“While this inherently isn’t an issue, the technician won’t have a measurable end play measurement to record,” he said.

There are several reasons to consider installing a preassembled hub and bearing assembly, according to Hogg.

“The component manufacturer will often offer an extended warranty. It involves less labor for a technician to just remove the damaged assembly and install a new one,” he said. “Little risk of contamination [and] many vehicles today have aluminum hubs, which should only be serviced if you have the ability to heat the hub and chill the races.”

Purvis said it’s important to check the bearing fluid for contamination and metal flacking during each preventive maintenance inspection, given that the hub being inspected offers easy access to the fluid.

“It’s always a good idea to check the bearings anytime the wheel is raised off the ground, but not always practical. The wheel end should be raised to check for noisy or loose bearings and fluid condition. The outside bearing should be removed and inspected, if possible, based on the hub design,” Hogg said. “The overwhelming benefit of an annual inspection is to readjust the end play or to simply re-torque the retaining nut.”

It can be difficult to tell when a wheel bearing is out of adjustment without measuring wheel end play, Purvis added. However, some leading indicators are excessive wheel-end temperature, uneven tire wear or the tire not spinning freely.

Additionally, Hogg noted a strong indicator that a wheel bearing is out of adjustment is when the ABS dashboard light comes on or goes off while depressing the service brakes.

“Anytime an ABS light comes on, the driver should stop and check the hubs, as this could indicate a wheel is loose or overheating,” he said. “If you notice irregular wear on a tire, this could also indicate that a wheel bearing is loose. A loose front wheel bearing can cause vehicle handling issues and a distinct humming noise in the cab of the truck.”

Another warning sign that a wheel bearing is out of adjustment is a leaking wheel seal.

If left unaddressed, Hogg said these warning signs could lead to progressive damage of the spindle and wheel hub, “which will increase the driver’s chances of nonessential downtime and result in higher repair costs,” he said. “Not addressing wheel bearings that are out of adjustment can also lead to brake imbalance and poor brake performance.

Completely ignoring the warning signs could ultimately result in a wheel and hub assembly separating from the vehicle while it is in motion. Similarly, this can cause the wheel seal to eventually fail, causing all the fluid to leak out and resulting in a fire on the wheel end.

Reuse of preset systems and components in the field assumes all components are suitable for reuse, and Purvis noted that components worn out of specification may not be discernible “and present the risk of tightening down a wheel end outside of recommended end-play specifications.” 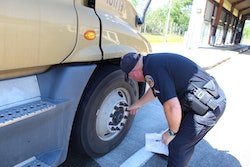 Beating the Blitz: Tire, wheel violations round out list of top out of service violations