That's trucking in 2021 – or at least a widely held perception of it.

Surging freight spurred by ongoing pandemic recovery coupled with stagnating capacity has added to the notion that there's an ongoing driver shortage, yet FTR Vice President of Trucking Avery Vise noted that in terms of sheer driver population, "we probably have more than we did before the pandemic" based on the recovery of headcount in payroll employment along with a surge in new for-hire carriers dating back to July 2020.

Aaron Terrazas, director of economic research at digital freight network Convoy, said he also doesn't subscribe to the idea that there is a chronic undersupply of drivers, because almost all relevant labor and payroll data suggests "trucking industry employment across the board is close to, or right at, or slightly above, pre-pandemic levels."

Terrazas conceded that some fleets may be feeling a labor force strain, but that is more an effect of excess freight than a shortage of drivers, and that "at some point, demand is going to come back down, and depending on how far it comes back down, supply could be well in line with those needs a year, two years down the line."

Similarly, J.B. Hunt Senior Vice President Corporate Safety, Security and Driver Personnel Greer Woodruff said the driver issue always comes down relative to supply and demand, and that it's always seeking equilibrium. "As long as there's demand that's outpacing supply then there's an associated cost to the supply chain," he said. "I happen to believe we have plenty of drivers. We don't use them very well."

There are currently 6.8 million commercial drivers – 4.9 million of which are CDL holders – driving intrastate and interstate commerce. Since mid-2020, the number of new for-hire trucking companies (grants of motor property carrier authority) each month has nearly tripled, according to FTR, but that's not done much to chip into the available freight supply.

"I don't think what you're seeing on the carrier number increasing is adding capacity," Woodruff said. "It's really a shift from company drivers to owner-operators because of AB5, because of the high spot market rates and things like that that are causing drivers to start their own companies, but I do think there is lower driver counts than there was pre-pandemic."

"We're at 6.5 of 11 hours of driving (industry average per day). If you could move that needle to just 8.45, that's a 30% increase in capacity without adding any drivers or trucks." Greer Woodruff, J.B. Hunt senior vice president of corporate safety, security and driver personnel

Reduced driving school capacities have slashed the number of credentialed drivers – about 150,000 fewer new CDLs were issued in 2020 versus the year before. "You have people that were quarantined, which is a temporary problem. You had people who retired early, who were maybe older in age or had other risk factors," Woodruff said, adding that longer term issues include legalization of marijuana and the Drug and Alcohol Clearinghouse, which has sidelined more than 50,000 CDL holders that haven't even started the return to duty process.

While it's clear there's more freight than drivers available to haul it, Thom Albrecht, Reliance Partners Insurance chief financial officer and chief revenue officer and former chief commercial officer and CFO with Celadon, said that he felt the driver issue was close to finding its equilibrium

"I think the industry is close to having enough drivers, but you can find carriers that truly have a supply problem " he said. "It may be because of their network shape. It could be the way they've treated drivers historically. We try to make this such a black and white question."

"I think what is clear today versus 2018 – the last freight bull market before the last 16 or 17 months – is that we have a broad labor challenge in the United States. The labor participation rate is barely 61%. Just a few years ago it was 67% and I think it was 65%-ish pre-pandemic," Albrecht said. "We know that about 4 million women have chosen to not come back into the workforce for various reasons. Some of the Baby Boomers may have taken an early retirement. All of this probably touches trucking in one small way or another. The U.S. is probably facing the greatest labor challenge – I don't want to say the word shortage – in our lifetimes."

The sliver lining, Albrecht noted, is that shippers and warehouses are now facing the same kind of labor challenges that have plagued trucking for decades, and fleets are now "speaking to a choir that finally understands it."

Carriers desperate to add capacity, Woodruff said, can often find gains without adding drivers or a truck by deploying expedited loading and unloading times; allowing drop-and-hook; adding flexible appointment times and appointment times that allow for efficient transit and rest time; working with shippers to accommodate onsite parking; and providing consistency in loads and lanes – all of which should squeeze more drive time out of a driver and add capacity into the market.

"We're at 6.5 of 11 hours of driving (industry average)," Woodruff said, adding recent data suggests drivers are now getting 6.4 hours of drive time in an 11 hour on-duty period. "If you could move that needle to just 8.45, that's a 30% increase in capacity without adding any drivers or trucks, and that's meaningful. That's over 1,000 drivers and trucks that would be available to the supply chain if we could find out how to harness that."

Terrazas noted there's "enormous potential" in drop-and-hook to add capacity to the system while allowing drivers to make the best use of their time. A 1% increase in drop-and-hook utilization, he said, can equate to the equivalent of an uptick in availability to the order of 10,000 drivers.

Allowing drivers under the age of 21 to drive Interstate has long been seen as a means to increase the available driver pool, but to-date that has been met with reluctance. However, the current infrastructure plan includes a pilot program that could finally set those wheels in motion.

Albrecht said the general assumption is that insurance underwriters are against allowing young CDL holders to cross state lines because, historically, the actuarial data has not been favorable toward younger drivers, but he added the reality is that some underwriters have said they wouldn't mind seeing this forced upon the industry "because it would allow the actual gathering of data at the professional truck driving level (for 18 to 21 year olds). It would expand that data and it could be assessed," he said, "and then it could be appropriately rated for the risk."

Woodruff noted safety concerns with allowing younger drivers to drive interstate were legitimate based on past risk profiles but added that an under-21 driver currently can drive more than 600 miles from Laredo, Texas, to Texarkana, Texas, but is prohibited from driving the extra two miles to Texarkana, Arkansas.

"That does not make as much sense, and I think with some of the safety capabilities, technologies and oversight that we could have, that you could make the case that you could (drive interstate) safely," he said. "I don't necessarily see that solving the problem, but I do think that it helps attract younger people – and we do have 26% of the CDL holders today are over 55 years of age, and we're going to face a time in the next 10 to 15 years where we're going to have a pretty large number of people leaving the industry, and we're going to have to very creatively find ways to attract younger drivers into the industry." 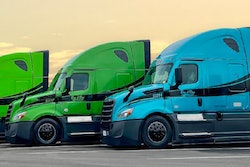 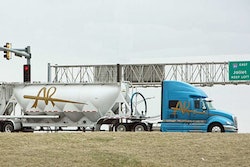 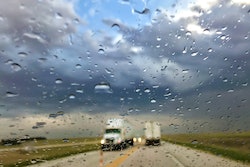 Preparedness, communication key to mitigating the effects of a weather event on fleets and maximizing opportunity