Tractors pulling two trailers of various lengths, known as long combination vehicles (LCVs), have been permitted in parts of Canada and in 20 U.S. states for decades. In 2004, the U.S. Senate used the highway reauthorization bill to freeze size and weight restrictions for commercial vehicles. Meanwhile, Canada has expanded LCV operations.

In late 2002, Bison Transport began to dabble with the idea of creating an LCV net- work across Canada’s Prairie Provinces. From its headquarters in Winnipeg, Manitoba, the network would span to Calgary and Edmonton in the West.

In previous years, the company had seen the benefits of using LCVs but hadn’t fully immersed itself in an LCV program because of lane density and equipment constraints. “It wasn’t profitable to take loads to Western Canada,” says Rob Penner, Bison’s executive vice president and chief operating officer. Most of what is produced or manufactured in Calgary is shipped out through a pipeline. “Rates into the region were not as strong as they needed to be to support the backhaul environment,” Penner says.

But by 2003, executives had decided to exploit LCVs in the Prairie Provinces to make sense of those lanes. They also saw an opportunity to create a network that would provide significant environmental benefits along with gains in efficiency, capacity and drivers’ quality of life. From that point on, every trailer the company purchased was spec’d for LCV operations.

Bison’s LCV fleet uses a Turnpike Double configuration consisting of two 53-foot trailers. All trailers are equipped with pintle hooks, airlines and electrical connectors at the rear. A dual-axle converter dolly couples the A-trailer to the B-trailer. To optimize weight, the company uses daycabs and small bunk tractors.

The decision’s timing was impeccable. Fuel prices continued to rise in 2004, and shippers wanted alternatives to offset rising fuel surcharges from carriers; Bison also wanted to make significant fuel efficiency gains. The company quickly grew its LCV fleet into the largest one in North America with 250 tractors and 1,650 trailers.

In 2009, Bison participated in a pilot program for LCVs in Ontario on certain routes. The company currently has six permits to operate LCVs in the region.

As required by law, Bison’s LCV equipment and drivers must operate under special permits with specific safety requirements and mandatory training and operating restrictions. LCVs must stay on certain routes and can operate only at certain times and within certain speed limits.

Overall, the company’s LCV division runs more than two million miles a month within Ontario and the Prairie Province. It accounts for 20 percent of the fleet’s total mileage.

For shippers with freight that moves within the Prairie Provinces of Alberta, Saskatchewan and Manitoba, LCVs are the transportation mode of choice, and the reason is not always cost savings.

Bison’s LCV lanes require more investment in drivers and a higher trailer-to-tractor ratio. The company also has
to compensate for the weak backhaul environment in Western Canada. While it cannot guarantee a shipper that its LCV freight rates will be less than a single tractor-trailer, it can guarantee environmental savings; an LCV reduces greenhouse gas emissions by about 40 percent compared to a single tractor-trailer.

Due to the increased weight, an LCV’s fuel economy is about 20 percent less than one tractor-trailer combo. But since an LCV essentially hauls the same cargo as two tractors, doubling its mpg is the equivalent of a single tractor getting 11.4 mpg, Penner says.

As part of Bison’s U.S. Environmental Protection Agency SmartWay initiative, the company has designed a plan to reduce emissions by a further 6.5 percent over the next three years. Central to this plan will be finding ways to improve vehicle fuel economy by optimizing its LCV trailer combinations to minimize gross vehicle weight. The LCVs have a combined payload of about 70,000 pounds and a gross vehicle weight of 134,000.

“You cannot put two heavy loads together – to optimize, we look to match heavy and light loads,” Penner says. With the LCV network, Bison has the flexibility to combine loads moving into and out of Western Canada to maximize fuel savings. That same flexibility also gives the company the opportunity to move commodities
that otherwise would not be economical or serviceable with one truck, trailer and driver.

Bison has a network of terminals it uses for swapping drivers and hooking and splitting LCV units, making the transit time for shipments the same or better than single-trailer service. The distance between Winnipeg and Calgary is 824 miles; while a single driver in a five-axle configuration could not finish the trip in one day because he would run out of hours, the company’s expedited LCV network allows the trip to be completed in one day.

As with the rest of the fleet, Bison gives customers real-time visibility of all loads
it moves in the LCV division to help them see their time savings and efficiency gains. Customers can receive e-mail reports when loads are delivered or receive an automatic status report at a certain time each day.

“Most operating systems don’t anticipate the LCV model,” Penner says. “We had to build our own operating module to provide visibility to customers and to the rest of the business.”

The LCV fleet and network design has been instrumental for the company to provide higher-paying jobs and more home time for drivers. With the terminal network, Bison’s drivers can choose to run dedicated routes that return them home daily.

LCV drivers average 550 miles a day with 50 cents per mile for all Turnpike Double miles and 39 cents for single-trailer miles; they also earn accessorial pay for coupling and splitting trailers and for deliveries. The drivers earn an average of $300 per day.

Night and weekend drivers earn an additional premium of at least
10 percent depending on their start time. Top drivers in Bison’s longhaul highway fleet can earn about $75,000 Canadian dollars; by comparison, a top LCV driver can earn $100,000.

Most LCV drivers in the company’s fleet have risen from within its ranks. Bison requires LCV drivers to have a minimum of two years of driving experience; once hired, the company puts the drivers through a two-day training course, followed by a mentorship program. “We’ve got the best of the best of our professional drivers doing this,” says Garth Pitzel, direc- tor of safety and driver development.

In addition to saving Bison money while at the same time offering drivers a better quality of life, the LCV fleet leads the company in safety. Last year, the LCV division accounted for 20 percent of the miles but only 15 percent of the fleet’s U.S. Department of Transportation- recordable accidents; Pitzel credits this achievement to their selection of LCV drivers as well as the company’s commit- ment to safety.

The risk of the LCV operations is actually lower than statistics show considering that for each LCV on the road, one less driver and tractor is rolling down the highway.

With a decade of experience in LCV operations, all employees at Bison are grateful the company made the move, Penner says. Without adding the LCV fleet, the company likely would not have been able to stay profitable during the recession that began in 2008, he says. Bison was able to emerge from the recession without any layoffs.

“The network is true to them,” Penner says.“(Employees) see it as not just a load we chase, but a network we support.” 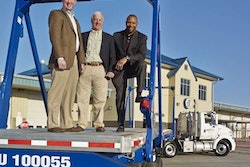 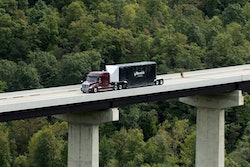 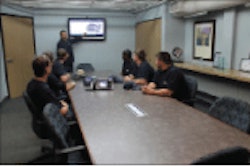 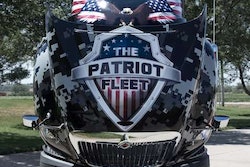