The toughest states for brakes violations: 2022 update to get prepped for Brake Safety Week blitz

As the Commercial Vehicle Safety Alliance’s Brake Safety Week approaches later this month (Aug. 21-27), experts offered insights and tips into one of the more common violations: brake hose chafing, the focus area for this year's weeklong event, during which inspectors will gather data on chafing violations while conducting the vehicle-focused portion of inspections.

Brake-related violations regularly make up the majority of vehicle out-of-service violations, according to the CVSA, and considering the maintenance category broadly, close to a majority of vehicle violations in some states with a brake-heavy focus like North Dakota, Montana, Virginia, California and Texas. Those five states lead the nation for high percentages of brakes violations uncovered, calculated as a percent of all violations issued in the state. That's according to Overdrive's 2022 CSA's Data Trail annual update analyzing inspection and violation trends nationally.

Nationally, brakes violations have been on a downward trend as a share of the total violations, though.

During the upcoming Brake Safety Week enforcement blitz, inspectors will no doubt scrutinize the entire brake system, in addition to other vehicle components. In preparation, you can access prior reports on brake adjustment, adjustment and the 20% out-of-service rule, and other helpful brake-maintenance resources via those links.

But the hoses and tubes that support that overall air brake system have become of such concern for the likelihood of chafing that CVSA reports it as "one of the more common vehicle violations, and one that can affect a motor carrier’s safety rating." CVSA recently published a flyer that focuses on brake hose and tubing tips with advice on chafing prevention leading the way.

“Chafing of an airline is typically from the line rubbing or touching something that leads to this kind of wear,” said Joe Kay, drivetrain engineering director at Meritor. “Air lines can also see damage from being bent and flexed constantly, which is a form of fatigue.”

Life on the road is tough. With trucks constantly hitting the highways, components like the chassis, suspension, powertrain and others (including brake hoses) are subject to movement, which can provide opportunities for chafing if hoses are not carefully routed and properly attached.

“Anytime hoses are permitted to move, there is potential for lines to rub,” said Transervice vice president of maintenance Matt Copot. “There are also times when objects might move brackets and create issues where lines are now touching as a result of brackets being moved and/or broken away.”

In addition to movement, improper brake hose length can also lead to chafing.

“If a replacement brake hose is installed and it is too long, it will be hard to install without there being a possibility of chafing,” said Brian Screeton, supervisor of technical service training at Bendix Commercial Vehicle Systems. “The correct length hose should always be used."

So who’s installing the wrong-sized brake hose which can lead to a costly OOS violation? It’s not the truck OEMs.

“By far, most hose chaffing issues are caused by previous repairs,” explained Daniel Mustafa, director of technical service at Travel Centers of America. “When a truck technician does not reinstall the various clamps and routing hardware it allows the hose to move in a way that the manufacturer did not intend.” 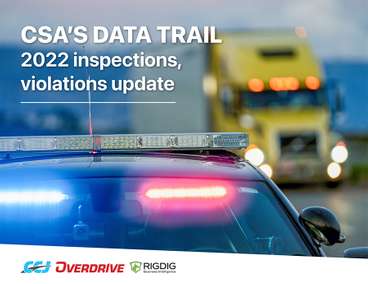 See how each state stacks up with this comprehensive report

Understand your inspection risk with these national rankings for inspection intensity, highly variable across the United States, as well as where an inspection is most likely to result in a violation in this report from the editors of Overdrive and CCJ in partnership with sister data company RigDig.

Download the report to access state-by-state insights on:
• Moving violations, such as speeding
• Hours of service
• Brakes, lights and other vehicle violations
• Clean inspections
• Violations per inspection

Inspecting and replacing damaged brake hoses during pre and post-trip inspections is the best way to avoid costly violations. Chafing leaves behind some pretty noticeable clues, as most inspectors will attest.

“By conducting routine visual inspections, most damaged lines that have occurred from rubbing can be seen,” Kay said. “Typically, it’s a color difference or the hose may not appear to be round where it touches an object. Look at the ends where the connectors are for damage due to flexing or the organic material stretching and ripping.”

Knowing where to look can make all the difference.

“Lines that are not located close to frame rails or on the upper interior side of channels are more prone to having chafing issues,” Copot explained. “In addition, lines that span open areas or provide for movement will be prone to chafing. Look at these areas as opportunities to provide spacing or even rerouting options to eliminate the potential of chafing, which lead to increasing CSA scores.”

Brake hose/tubing-related violations in general are a middle-grade severity weight of 4 (out of a possible 10) in the CSA Safety Measurement System methodology. If the violation results in an out-of-service order, such as in the picture above showing chafing that exposes the reinforcement ply of the hose, add another two points for a weight of six.

“Look for hoses that are close to and part of the chassis or axle,” Screenton said. “When inspecting a hose, even if is not touching anything, keep in mind that the axle will be moving relative to the chassis.

With improper repairs causing most hose chafing issues, Mustafa recommends being especially diligent following a repair by asking three questions, which may make the difference in keeping a truck on the road or getting it grounded with a costly violation: “Are all clamps and routing hardware in place? Do the hoses seem to be routed in a way that will prevent the hoses from contacting moving parts? Do the hoses seem to be excessively loose or tight, which would be evident from the lines being excessively loose or tight?”

In addition to looking for damaged lines and supporting hardware, including hose springs, look closely at air pressure readings and listen up.

“The best is conducting visual inspections like looking for worn surfaces but also listening for air leaks, and monitoring your air gauges to ensure excessive air is not being consumed, and replacing anything suspicious,” Kay said.

[Related: Stay ahead of the inspectors with this collection of maintenance-related coverage in Overdrive]

--Todd Dills contributed to this report 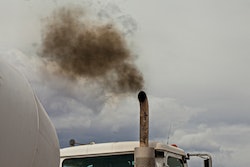 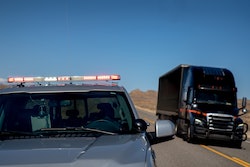 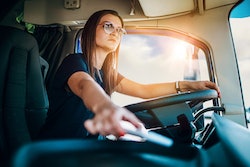 FMCSA Safe Driver Apprenticeship Pilot Program for under-21 drivers opens: How to apply