'Not a competition:' Paccar’s electric and fuel cell trucks prove impressive in Rockies

Paccar’s recent and historic mountain runs show the company’s electric and fuel cell trucks have some advantages in taking on steep and winding roads.

In addition to an average grade of 7%, the trucks were up against some tight turns and freezing temperatures which have been known to chip away range in EVs.

But in this case, the range of the powertrains and those hair-raising turns turned out to be impressive highlights for both trucks as they made repeated climbs up to the scenic 14,115-foot summit and back down.

Unlike their internal combustion counterparts, both trucks refueled during the descent thanks to regenerative braking.

According to Paccar, “over a 3-day period, the 579EV made the journey up Pikes Peak multiple times with ease, each time using the recovered energy from regenerative braking on the descent to recharge the high-density battery packs to repeat each climb with ease.”

The T680 fuel cell, an ongoing development between Kenworth and Toyota Motor North America R&D, also recharged its battery during the downhill trip.

“It worked as intended. Very well until the batteries are fully charged,” said Kenworth Research and Development Director Brian Lindgren.

While some critics have complained about the extra weight that powertrain batteries add to EVs, they can also provide increased stability given pack placement in the chassis.

“The performance of the Model 579EV while navigating to the summit of Pikes Peak was nothing short of amazing,” said Darryl Oster, Peterbilt assistant chief engineer. “Handling the 156 corners was made easier thanks to the lower center of gravity provided by the battery location on the 579EV.”

Lindgren was also impressed with the Kenworth’s performance in the turns.

“The Kenworth T680 FCEV had plenty of power on the hill climb, performed well at extreme altitude, and exhibited excellent drivability through the 156 twisting turns and switchbacks,” he said.

Neither truck was carrying a load during the climb.  CCJ asked both truck makers if they planned in the future to haul a load up to Pikes Peak or perhaps up Interstate 70 through the Eisnehower Tunnel, a.k.a. Ike Gauntlet, which is roughly 60 miles northwest of Pikes Peak in Dillon, Colo.

“Not at this time,” Lindgren said.

Though he didn’t rule out an Eisenhower Pass run, Peterbilt spokesman Tim Olson said the company has plenty of confidence in their all-electric truck.

“The narrow confines of the road up to Pikes Peak made hauling a load impossible, however we have no doubt that the Model 579EV could have easily carried a load to the top and back,” Olson said.

It’s no secret that fans of all-electric trucks often battle it out with fuel cell proponents over zero-emission superiority. While both rely on electric powertrains to keep the wheels turning, fuel cells use a hydrogen-fueled generator to produce electricity which is used to charge the powertrain’s battery pack. All-electric on the other hand must be charged up periodically.

Since Paccar offers both technologies through their subsidiaries Peterbilt and Kenworth, it’s tempting to think that the Pikes Peak run might have been a competition of sorts.

However, Kenworth spokesman Jeff Parietti squashed the idea and said the run was “not a competition. No winner or loser. Paccar explores different technologies through its divisions.”

Still, it’s good to know how both technologies fared during the steep run up Pikes Peak. For instance, CCJ asked about the trucks’ state-of-charge following the roughly 19-mile ascent. It was a non factor for the fuel cell.

“It’s not applicable because it recharges in minutes as you drive or as you’re parked,” Lindgren said of the T680 FCEV. “FYI, we drove up and down the hill several time each day for a week, in addition to driving from and to Colorado Springs (six miles) where we parked overnight and still had plenty of hydrogen fuel remaining without needing to top up.”

What about the state-of-charge for the 579EV following that steep trip up the mountain? Olson wouldn’t say, but he did point out how the truck recharged itself through regenerative braking during downhill runs and that the 19-mile ascent was well within the truck’s capabilities.

“The 579EV is capable of 150 miles of normal daily use with a loaded trailer so the bobtail runs up to the Peak each day allowed for the entire day’s events without any worry about remaining range or battery capacity,” he said.

Electric powertrains have a clear torque advantage over internal combustion. There’s no waiting on turbos to spool up or complex gear boxes. All of their torque is available the moment the accelerator is pressed. Though it wasn’t a race or timed event, the T680EV didn’t disappoint while taking on Pikes Peak.

“Let’s just say we had no trouble staying up to the speed limit,” Lindgren said.

The Peterbilt 579EV also had impressive acceleration during the climb.

“As this wasn’t a part of the annual hill climb run we obeyed all speed limits during our multiple runs to the top and back down,” Olson said. “The EV powertrain provided full torque at low speeds which allowed for quicker acceleration out of each of the 156 turns along the 12.3 mile route.”

While the T680 fuel cell with its 350-mile range didn’t require a hydrogen fill-up during its Colorado run, the Peterbilt did get recharged nightly.

“Temps were freezing (below 32F) at the base of the mountain and were below 10F as shown in the video when reaching the summit,” Olson said. “The batteries were fully charged and conditioned (warm) overnight each night so the low temps did not present a problem for range while ascending and descending the mountain.”

Validation testing is especially important for all-electric powertrains which have some fleets understandably concerned about higher upfront costs, infrastructure changes and lower range.

Kenworth’s partner Toyota, which produced the fuel cell for the T680 FCEV, has been tackling the issue of range through solid-state battery R&D. Solid-state batteries weigh much less than conventional lithium-ion, offer twice the energy density and can be charged in roughly 15 minutes. Toyota told CCJ that they expect to have a solid-state battery hit the market by the mid 2020s.

When asked about solid-state batteries Olson had no comment while Lindgren said, “Paccar continues to evaluate battery technologies for application in heavy duty trucks, considering a balance of energy density, energy transfer rates, mass and total cost of ownership.” 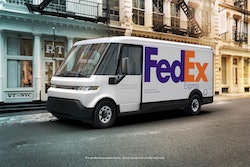 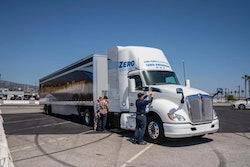 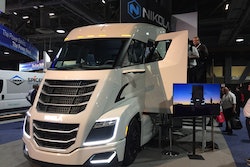