According to the company, customer feedback also confirms the benefits of its integrated engine and aftertreatment systems, including its ISX15, with reports validating that the engines are delivering up to 6 percent better fuel economy as compared with their EPA 2007 counterparts.

Cummins joined leaders from the Diesel Technology Forum at EPA’s Clean Diesel 10 event in Washington, D.C., to celebrate 10 years of cleaner air through the National Clean Diesel Campaign and the Diesel Emissions Reduction Program. The ISX15 and Cummins Aftertreatment System were showcased during the event.

“With SCR technology, I’m confident that the next decade will provide many advances that are mutually beneficial to clean air and satisfied customers,” says Srikanth Padmanabhan, vice president and general manager of Cummins Emission Solutions.

September 2010 marked the 25th anniversary of Mitsubishi Fuso Truck of America Inc. in North America. The company celebrated the silver anniversary milestone with a gathering of employees, local and state government officials and business partners, as well as representatives of its dealer council and executives from its parent company, Mitsubishi Fuso Truck and Bus Corp. of Kawasaki, Japan.

In 2007, the company introduced redesigned FK and FM models, and in 2009 expanded its operations once again, this time into Puerto Rico. Earlier this year, Mitsubishi Fuso delivered its 100,000th truck in North America.

* Great Dane Trailers broke ground for its new 450,000-square-foot refrigerated trailer manufacturing plant in Statesboro, Ga. Construction is expected to get under way later this year to bring the plant into production in 2012, with the capacity to produce more than 5,000 trailers annually.

* Bridgestone Bandag Tire Solutions will discontinue sales of its Dayton brand truck and bus radial tire line effective Jan. 1, 2011. The announcement does not impact the sales or availability of Dayton brand light truck or passenger tires.

* Brenntag North America will offer diesel exhaust fluid users a free service to pick up empty DEF totes from any previous supplier and will offer a special price to replace the tote with TerraCair Diesel Exhaust Fluid.

* The Green Truck Association, an affiliate division of the National Truck Equipment Association, launched its www.greentruckassociation.com website to function as a central clearinghouse for the development and deployment of green trucks.

Although the strength and speed of the current market recovery worldwide is of prime concern to all truck makers, Daimler Trucks is looking beyond current conditions toward what the company will look like in years to come. Daimler’s market is changing geographically, technologically and financially, says Andreas Renschler, member of Daimler’s board of management and head of Daimler Trucks and Daimler Buses.

In terms of volume, the balance of power is shifting from traditional commercial vehicle markets eastward, Renschler said. “Every second commercial truck over six tons is sold in China.” And the market potential outside the traditional markets is huge – not only in the BRIC countries of Brazil, Russia, India and China but also in the so-called “Next 11” emerging economies, where growth is expected to be strong and sustainable – even during global recessions – for many years to come.

One way the European commercial vehicle industry is poised to tap the potential of the global market is through its progress in alternative drivetrains, Renschler said. “True, diesel will still be the backbone of road transport when all of us are retired. But we have to think beyond that date, and we do.”

Electric commercial vehicles have great potential, especially in the growing market of medium- and light-duty trucks and vans, Renschler said. “The main driver here is urbanization.” He pointed to forecasts that 70 percent of the world’s population will live in cities by 2050. That means an increase in the need for urban transportation while traffic emissions must drop. “Of course, green logistics is not limited to urban areas.” Eventually, fuel cells could be a viable alternative for long-haul transportation, he said.

The third major change in the commercial truck industry – the importance of the services business – is just as fundamental even if it’s not as spectacular, Renschler said. “The most expensive truck is the truck that’s not on the road. In our business, efficiency is measured in uptime. That’s why we see an ever-increasing demand for services to maximize the operational time of a truck and minimize its total cost of ownership.”

Among the offerings Renschler counts as services are truck rental, financial services and telematics-based fleet management. “By the year 2030, for every euro in sales, we can expect to make more than 50 cents on services. Today we get just half of that.”

To capitalize on these trends, Daimler is pitching the idea of “Trucks for the World” – a slogan that synthesizes the ideas of the company’s global sales footprint, development and service capability. For example, Daimler already sells close to a third of its trucks in the BRIC and Next 11 markets and is increasing its presence there through two new brands and five new manufacturing facilities.

An example of Daimler’s global development is its Global Hybrid Center in Japan, where the company has centralized its hybrid development. Daimler also is looking for synergies between hybrid commercial vehicles and passenger cars. And although third parties have led the way on telematics in North America, Daimler plans to take its offerings such as TruckMobility and Fleetboard into new markets.

The goal, of course, is to take advantage of size and leverage products and technologies into as many markets as possible, but there are limits, Renschler concedes. “Our customers don’t buy ‘off the rack.’ … Our philosophy is ‘As local as necessary, as global as possible.’ ”

F-Series pickups don’t come any more loaded with luxury features than Ford’s King Ranch trim level package. This is clearly a styling cue meant to appeal to people who take horses to shows and rodeos, as evidenced by the plush leather appointments, wood-grain trimmed dash and special-edition wheels. With style and comfort the overriding theme here, it’s no surprise to find this truck packed with a wide array of amenities, including heated and cooled seats, sun roof and power-sliding rear window, Ford’s top-of-the-line HVAC climate control system, full audio-visual entertainment system, power-folding side-mount mirrors and an intimidating driver information system that turned out to be amazingly intuitive and simple to operate.

SuperDuty fans who were worried that International no longer will supply the PowerStroke diesel engine can rest easy: The new Ford-developed 6.7-liter diesel under the King Ranch’s hood proved to be highly impressive and productive. It is surprisingly quiet, even when working hard to get the big truck rolling from a traffic stop. The engine – predictably – kicks out plenty of low-end torque, but a pleasant surprise was the instantaneous power you can call on when passing at highway speeds. There is absolutely no turbo lag: The new Ford PowerStroke diesel accelerates with all the swagger of a large V-8 gas engine.

Fuel economy isn’t bad, considering both the size of the engine and the mass it has to move down the highway. Ford’s driver information center features real-time fuel economy data with a configurable window, giving you a look at your mpg performance over the past 5 minutes. (You can choose other timeframe options.) I found that my fuel mileage in city traffic varied from a low of 14 mpg up to 17 mpg, with 16 mpg being the norm. On the highway, that figure climbed to almost 19 mpg.

Despite its size – this is a real brute of a truck – the F-250 SuperDuty rides and handles well in every road situation imaginable. The four-wheel-drive engagement system is quick and easy to use, and will snap your head backward if you get too aggressive with the throttle in four-low. On the road, steering is straightforward and tight. And despite its bulk, the SuperDuty proved to be surprisingly nimble in parking lots and city traffic.

Ford deserves a lot of praise for its 2011 SuperDuty line. Losing International as an engine partner was a huge hurdle that the company clearly has overcome with the development of its new diesel family. As a result, Ford SuperDuty trucks haven’t skipped a beat in terms of comfort, performance and pure power. – 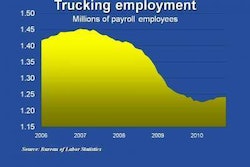 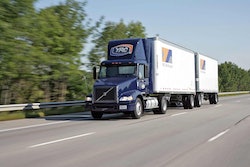 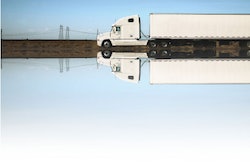