More than four years after the trucking industry asked the federal government to mandate speed limiters on new heavy-duty trucks, the National Highway Traffic Safety Administration announced that it would launch a rulemaking on the issue in 2012. In August, senior officials for NHTSA and the Federal Motor Carrier Safety Administration told proponents of speed limiters that they anticipated making a formal decision on launching a rulemaking by the end of 2010.

Both petitions proposed installation of devices on new trucks that would limit top speed to 68 mph on trucks with gross vehicle weight ratings (GVWR) greater than 26,000 pounds.

According to a notice published in the Federal Register, NHTSA is granting two separate petitions for rulemaking filed in 2006, one by the American Trucking Associations and the other by safety advocacy group Road Safe America along with nine trucking companies – Schneider National, C.R. England, H.O. Wolding, ATS Intermodal, Dart Transit, J.B. Hunt, U.S. Xpress, Covenant Transport and Jet Express.

Both petitions proposed installation of devices on new trucks that would limit top speed to 68 mph on trucks with gross vehicle weight ratings (GVWR) greater than 26,000 pounds. The major difference between the petitions is that Road Safe America and its nine carrier allies also want speed limiters mandated on all existing trucks built after 1990.

NHTSA’s notice granting the petitions does not explain why it won’t begin the rulemaking for more than a year. The notice does mention, however, that NHTSA expects FMCSA to publish findings of a study on the safety impact and associated economic benefits of speed limiters in commercial motor vehicles.

The decision to grant the petitions from ATA and Road Safe America to conduct a rulemaking does not mean that a final rule will be issued, NHTSA said in its Federal Register notice. “The determination of whether to issue a rule is made after study of the requested action and the various alternatives in the course of the rulemaking proceeding, in accordance with statutory criteria.”

Even if NHTSA ultimately doesn’t adopt the specific rule ATA and Road Safe America seek, speed limiters would become more common under another rule NHTSA and the Environmental Protection Agency already propose related to heavy-truck fuel efficiency and greenhouse gas emissions reduction. Under the EPA/NHTSA proposal, truck manufacturers would face mandates to increase fuel efficiency of tractor-trailers though use of several technologies, including vehicle speed limiters.

More information on the petitions for rulemaking and comments on those petitions are available at www.regulations.gov by searching NHTSA-2007-26851. – Avery Vise

* The Occupational Safety and Health Administration cited Elizabeth, N.J.-based New England Motor Freight Inc. for 17 violations after an employee sustained a foot injury while operating a forklift at a freight terminal. The company faces a total of $76,000 in fines for violations at several terminals.

* The Pipeline and Hazardous Materials Safety Administration is revising its procedures for applying for a special permit to require an applicant to provide sufficient information about its operations to enable the agency to evaluate the applicant’s fitness and the safety impact of requested operations. The agency also is providing an online application option.

* The Federal Motor Carrier Safety Administration requested approval to revise and extend an Information Collection Request entitled “Hazardous Materials Safety Permits,” which requires companies holding permits to develop communications plans that allows for the periodic tracking of the shipments. Records must be kept for at least six months or be readily available to employees at the company’s principal place of business.

* At an event marking the one-year anniversary of FocusDriven, a nonprofit organization dedicated to advocating for victims of distracted driving, U.S. Transportation Secretary Ray LaHood reaffirmed his commitment to putting an end to distracted driving.

According to data released from the Commercial Vehicle Safety Alliance’s Operation Safe Driver campaign, the top three reasons warnings and citations were issued to commercial vehicle drivers include speeding, failing to use a safety belt and failure to obey traffic control devices.

The fourth annual Operation Safe Driver took place Oct. 17-23, during which time law enforcement officers nationwide pulled over nearly 53,000 commercial and passenger vehicle drivers. Operation Safe Driver was launched in 2007 by CVSA in partnership with the Federal Motor Carrier Safety Administration to address improving the behavior of all drivers operating in an unsafe manner — either by, in or around commercial vehicles — and to initiate educational and enforcement strategies to address those exhibiting high-risk behaviors.

“CVSA’s Operation Safe Driver is targeting each and every driver, whether they drive a passenger car or a CMV, and alerting offenders that their poor driving behaviors result in lives lost,” said Stephen Keppler, CVSA’s executive director. “We will continue to emphasize this point, through both education and enforcement tactics, until we eliminate those driver behaviors that are specifically linked to causing crashes.”

Detailed results from CVSA’s Operation Safe Driver can be found at www.ccjdigital.com/cvsa-osd.

Eighteen companies have been selected as division winners in the Truckload Carriers Association’s 35th annual National Fleet Safety Awards, which recognize trucking companies that demonstrate a superior commitment to safety and accident reduction.

All division winners now are eligible to compete for two grand prizes, one in the “less than 25 million annual miles” category and one in the “25 million or more annual miles” category. To win the grand prize, companies will be judged on their overall safety programs, both on- and off-highway, including employee driver/independent contractor selection procedures, training, supervision, accident investigation, inspection and maintenance of equipment, and outside activities including general highway safety.

The 18 companies and two grand-prize winners will be recognized at an awards ceremony to be held during TCA’s Annual Convention, set for March 13-16 at the Hilton Bayfront Hotel and San Diego Convention Center in San Diego, as well as during TCA’s Safety & Security Division Annual Meeting, set for May 15-17 at the Embassy Suites Murfreesboro Hotel and Conference Center in Murfreesboro, Tenn.

At the roadside safety inspection that morning (which earned him a CVSA decal), tractor-trailer driver John Doe had a brief chat with the safety specialist from the Office of Motor Carrier and Highway Safety about the agency’s emphasis on enforcement and total aversion to cooperation. Trucking companies now must be viewed as the enemy camp, Doe was advised, and most commercial vehicle enforcement personnel already had purged their desks of diecast model trucks, coffee mugs and ballcaps displaying the names of extinct and extant motor carriers. How sad! 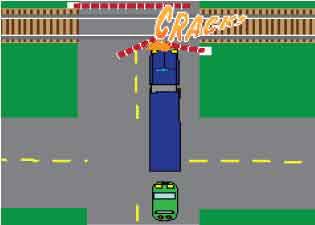 John Doe accelerated through the railroad crossing to prevent a tailgating small car from rear-ending his rig, but a descending signal arm mangled his shotgun-side West Coast mirror. Was this a preventable accident?

Egad! The light at the grade crossing had just turned red, and the gates were descending! If Doe stood on the brakes, the little car that presumably still was tailgating his rig surely would run smack into his underride guard, 10-4? So Doe floored the accelerator and … CRACK! Oh no! A signal arm had descended upon, and severely mangled, the shotgun-side West Coast mirror! Argh!

Since Doe contested the preventable-accident warning letter from his safety director, the National Safety Council’s Accident Review Committee was asked to render a final decision. To Doe’s dismay, NSC ruled against him, noting that it’s better to risk being rear-ended by a Honda Civic than to be sideswiped by a freight train. Doe should have panic-stopped, NSC decided. 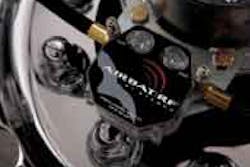 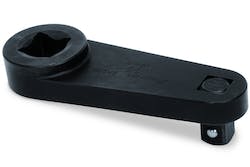 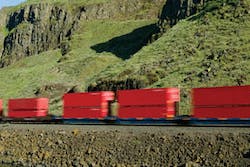 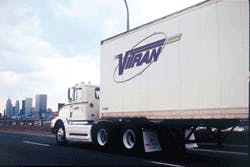