BTS, a part of the Research and Innovative Technology Administration, reported that the level of freight shipments measured by the Freight TSI, 109.7, declined from the all-time high of 113.7 set one month earlier in December. However, shipments in January were at the second-highest level since July 2008.

The Freight TSI measures the month-to-month changes in freight shipments by mode of transportation in ton-miles, which then are combined into one index. The index measures the output of the for-hire freight transportation industry and consists of data from for-hire trucking, rail, inland waterways, pipelines and air freight. 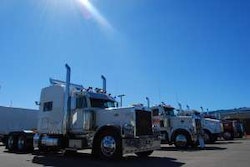