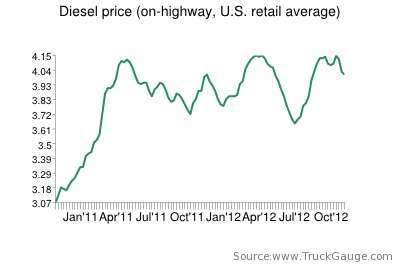 The average diesel price rose in all East Coast regions — New England, Central Atlantic and Lower Atlantic — and the West Coast less California region but fell in all others. The largest decrease was in California, where the average price dropped 6.5 cents to $4.16 a gallon.

The New England area — which was hit by Hurricane Sandy two weeks ago — had the highest average price at $4.198 a gallon, while the Gulf Coast region had the lowest price, $3.875.

The price in all but three regions — the Lower Atlantic, Midwest and Gulf Coast — remained above $4 a gallon.