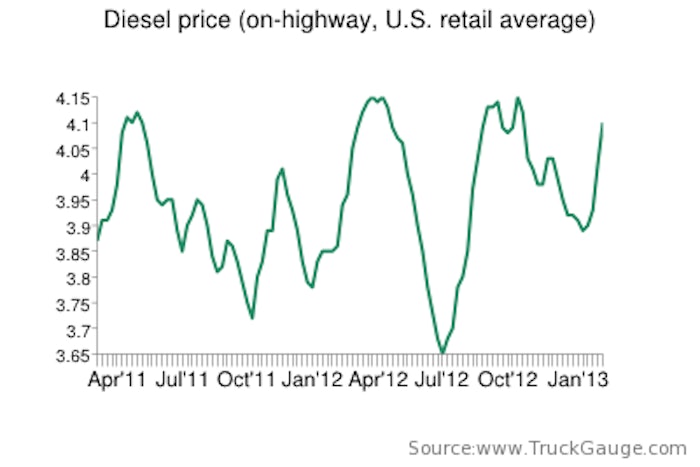 Continuing what seems to be the early stages of a surge, the national average retail diesel price rose 8.2 cents to $4.104 a gallon during the week ended Feb. 11, according to the U.S. Department of Energy’s Energy Information Administration. After dropping 25.6 cents in a run of 12 decreases in 13 weeks, the national average price is up 21 cents in the past four weeks. The average price is 16.1 cents higher than the same week last year.

Diesel prices rose in all regions, led by a 12-cent jump in the Rocky Mountain region, which, nevertheless, still has the nation’s cheapest diesel on average at $3.964. Only in the Rocky Mountain and Gulf Coastthe West Coast (excluding California). The smallest increase was 5.6 cents in New England, which no longer has the nation’s most expensive diesel. That distinction goes to California, where diesel prices on average are $4.242 a gallon — five-tenths of a cent more than in New England. The Rocky Mountain region still has the nation’s cheapest diesel at $3.844 a gallon. The only other regions where the average price remains under $4 are the Gulf Coast and Midwest.