The average cost of operating a truck was down slightly in 2012, according to a newly updated benchmark report by the American Transportation Research Institute. But high fuel prices and pressure to increase driver pay point to growing costs for the trucking industry in the near future, says the study, “An Analysis of the Operational Costs of Trucking.” 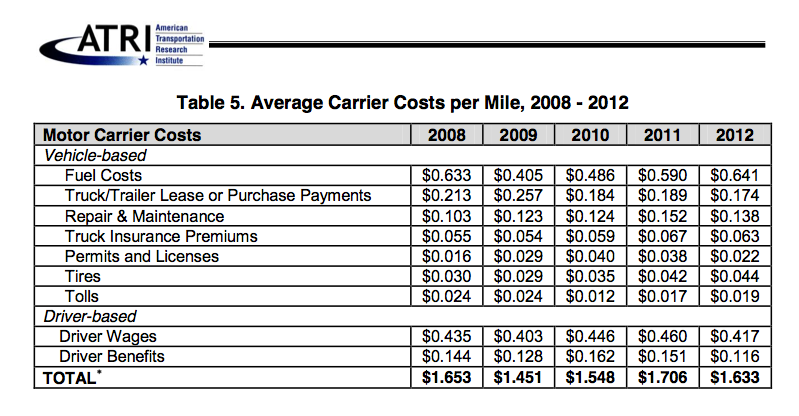 Rising fuel, tire and toll costs did not outweigh the decreases in driver wages and benefits, equipment lease and purchase payments, repair and maintenance, permitting and licensing or insurance premiums, the report shows.

The decrease in driver wages (4.3 cents) and benefits (3.5 cents) had the largest impact on the overall cost change.

The decline comes even with annual fuel costs exceeding those of 2008, when the price of diesel approached $5.00 per gallon. Furthermore, fuel costs last year accounted for 39 percent of total carrier costs, which is the largest share documented by ATRI in the five years of research.

“Although we have seen conditions improve since the Great Recession of several years ago, an uncertain economic future means we have to be ever diligent in watching costs,” says Phil Byrd Sr., president and CEO of Bulldog Hiway Express and first vice chairman of the American Trucking Associations. “ATRI’s report provides critical financial data for carriers to use in benchmarking fleet performance and seeking opportunities for improved operations.”

Indeed, the decrease in average operating costs from 2011 was most likely due to the weak recovery and softening freight conditions experienced in the second half of 2012, the report notes.

Fuel costs and driver wages continue to constitute the majority of costs for carriers. Along with persistent high fuel prices, an increasing freight demand, new government regulations and an aging workforce will intensify the shortage of qualified drivers.

“This will likely require carriers to increase wages and benefits in order to recruit and retain drivers,” the report concludes. “All of these factors will likely place upward pressure on motor carrier operating costs in the near future.”

The research identifies trucking costs from 2008 through 2012, derived directly from fleets’ financial and operational data. The report is designed to provide carriers with a high-level benchmarking tool and government agencies with real-world data for future infrastructure improvement analyses.

Since its original publication in 2008, the Operational Costs of Trucking reports continue to be one of ATRI’s most requested, the trucking industry’s research organization says.