Starting in 2000, the Department of Defense spent $30 million over a 10-year period with the Rochester Institute of Technology (RIT) in New York to transform its practices for vehicle maintenance. The project was designed to predict equipment failures for combat vehicles based on their real-time operating conditions.

Justifying the project was easy. After all, the last thing a soldier should fear during battle is an unscheduled maintenance problem or worse, a breakdown. Being able to predict failures in advance would help improve results on the battlefield and perhaps save lives.

Like many government-funded research projects, this one had broader applications in the commercial market. Some engineers involved in the project used their expertise in areas like predictive analysis, vehicle electronics, and software programming to help launch a commercial venture.

About five years ago, Vnomics applied the research to a telematics platform designed to help fleets and drivers improve fuel economy.

To do this, Vnomics uses proprietary algorithms to calculate the “true” fuel economy of vehicles and drivers. This measure does not include external factors like load weight, terrain, temperature and headwind on mpg. The system also identifies “potential” fuel economy based on the variables drivers and fleets can control.

Visibility of these two metrics extends from the office to the cab. Drivers see their individual “true” performance for fuel economy and their “potential” along with getting real-time guidance and coaching on how to improve.

“Once you know the potential you can deliver real-time decision support on how to reach the fuel economy potential,” says David Chauncey, chief executive officer of Vnomics. “It is the only product that identifies the true fleet fuel economy and delivers real time coaching based on current operating conditions.”

The system determines precisely what is going on with vehicle with real-time inputs on throttle position, engine RPMs, shifting patterns, etc. But it also considers the impact of topography (is the vehicle going up a hill?), load weight, headwind, outside temperature and other factors.

“It gives a really detailed picture,” he says. By considering so many inputs, Vnomics can accurately predict what will happen next and what immediate actions are needed to influence fuel economy. Vnomics provides drivers with visual and audible alerts that are carefully orchestrated to help but not to antagonize them.

“We are not telling (drivers) how to shift, accelerate, or follow behind a guy. We do not provide real time feedback based on what their decisions are. We coach them to make best decisions based on best practices,” Chauncey says.

As an example of this “best practices” approach to coaching, consider a driver who is approaching a hill. The driver will likely speed up and then downshift so as to not lose momentum. Telling the driver when to shift would take the decision out of his or her control and lead to them not liking you, he says. If the driver already had a habit of making good decisions in similar scenarios, Vnomics would stay silent. It only interacts with drivers when it senses they are consistently not doing things right.

It would also interact if the real-time operating conditions warranted a change in strategy. As a driver approaches the hill, Vnomics would tell the driver, for example, that “you are about to climb a hill. Based on the weight of the vehicle and the incline of the hill you don’t need to downshift.”

“We would then provide feedback for how they did with that decision, which would lead to a better (future) decision,” Chauncey says. The feedback would come the next time the vehicle stopped. The in-cab display would light up and show the driver a scorecard. Immediately the driver sees what he or she is doing right and in what areas they can improve.

Vnomics’ telematics platform is configurable for each type of fleet. It has a standard 7-inch cab display but the display could be a mobile device. Some fleets may not want to use a display at all and stick with audible alerts. Vnomics also offers electronic logs, integrated messaging and workflow with dispatch systems, and fuel tax reporting. Professional services and training come standard to help users maximize the system’s capabilities, Chauncey says. 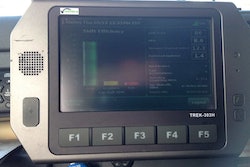 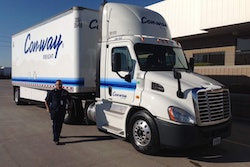