PedalCoach makes fuel savings easy: ‘keep it in the green’

This past Spring, an experienced driver noticed that his fuel scores were increasing, day after day. A few weeks earlier, Steve Page, vice president of safety for Transport Distribution Company in Joplin, Mo., placed an Android device in the driver’s truck to run an application called PedalCoach.

He gave the driver one simple instruction: “Keep this thing in the green.”

The user interface of PedalCoach is a large, digital gauge. The needle represents the flow rate of fuel to the engine. The “green” area represents the fueling target; it is the appropriate amount of fuel for the truck at any given moment.

The fueling target is based on the laws of chemistry and physics. PedalCoach connects to the vehicle’s J1939 databus to perform instantaneous calculations using ECM data. Its patent-pending algorithms can infer a lot about the truck and the operating conditions, starting with the first acceleration event and continuing thereafter.

The software knows, for example, whether or not the truck is pulling a trailer and how much it weighs.

“The driver can feel how much he’s got, and so can we,” says Jeff Baer, founder and chief executive officer of LinkeDrive, developer of PedalCoach. Baer, a mechanical and systems engineer, spent part of his career as the engine calibrator for Ford Motor Co.

Drivers that stay in the green, he says, are efficiently creating and preserving momentum.

“The green zone represents the equilibrium between driveability and fuel economy,” he explains.

Drivers don’t have to be staring at the digital gauge to stay in the green. They hear an audible tone if they cross into yellow or red territory and the “cha-ching” of a cash register every time they complete a mile in the green.

At the end of every trip (an ignition on/off event), PedalCoach displays the driver’s score on a scale of 0 to 100. The score answers the question: “Did you do the best you could with what you had?” Baer says.

Before using PedalCoach, the TDC driver was averaging 5.8 mpg running a 14-liter engine. Within a few weeks of using PedalCoach the driver climbed up to 6.8 mpg and was staying there consistently. “Keeping it in the green” was an enlightening experience.

This type of real-time adaptive fuel coaching has been a paradigm shift for TDC. Before using PedalCoach, Page trained drivers in face-to-face meetings using a “DDEC” report downloaded from the ECM. Page would reinforce positive behaviors like progressive shifting and “time in top gear” and point out negative behaviors like hard braking and speeding.

“The problem with this method is that it took several weeks before drivers knew whether or not they had achieved the fuel bonus,” Page says. “By then, drivers didn’t remember what they did wrong.”

“It helps you with the worst guys,” he says about the weekly fuel reports. “But you are still talking to them based off of information that is gathered by generalization.”

With PedalCoach, drivers are now constantly aware of their fuel performance and how it compares to drivers in the fleet.

“You start learning how to drive that truck,” Page says. Overall, the company has realized a 12 percent improvement in mpg in six months using the software with a variety of drivers. 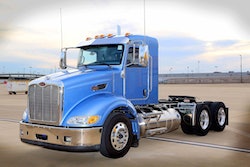 Peterbilt gets Texas environmental tip of the hat 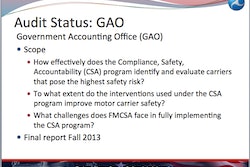