The third-quarter uptick in GDP and stable fuel prices are “good news” stories for trucking, an industry economist says – but an aggressive regulatory agenda will continue to impact profitability more than modest economic gains. 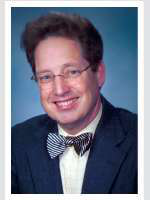 Indeed, recent economic stability has also made for unprecedented stability in logistics costs, according to FTR Senior Consultant Noël Perry. FTR forecasts faster growth in those costs, but not nearly so dramatic as in previous recoveries.

The biggest factor in increased transportation costs will be the regulatory environment. The Federal Motor Carrier Safety Administration’s agenda is “a very, very big deal” in terms of the number additional hires the new rules and regs will require, Perry emphasized during the quarterly economic update by FTR Freight Intelligence, “The State of Freight.”

FTR estimates the cumulative impact to be more than 1.4 million new hires by the end of 2016. And shortages will occur when demand outpaces the industry’s recruiting infrastructure.

“Even though FMCSA has been a little slower than expected in doing some things, they keep adding more requirements, and so does the Congress,” he said. And though the agency may be running behind schedule on major initiatives, “that doesn’t mean the problems go away. FMCSA has told us they’re going to push them out a bit – and they’ll probably think of something else to make it worse.

“Truck safety is a very popular political idea in this country. It’s not going to go away.”

In terms of capacity utilization, the trend for the past 20 years has been gradually upwards. The industry has learned to operate with less and less margin for error, and excess surge capacity has been greatly reduced, Perry explained.

“The good news is we’ve been able to operate at relatively low costs, with these high levels of capacity utilization,” he said. “If we get a surge, prices will rise dramatically.”

Indeed, based on Perry’s analysis, the capacity shortage currently is nearly at the same level as in 2004, when trucking was able to translate the supply-and-demand imbalance into significant rate gains. The difference, however, is that the 2004 swing was driven largely by freight demand, whereas regulations currently play a larger role.

“We’re at that point where now it’s no longer possible to find another driver or another tractor. We should be beginning to see price increases,” Perry said. “What we’re getting is the beginning evidence of a price effect, but no evidence of a stampede.”

And while a projected 5 percent increase in truckload rates is much more modest than during past upswings, it’s still better than any small gains trucking has realized in the past two years. The “upside exposure,” however, could be considerably higher if the operational challenges related to the recent hours-of-service rule changes are significant and widespread – and Perry puts the chances of that happening at better than 50 percent.

Asked about the chances there soon will not be enough trucks or drivers to deliver the freight, Perry again suggested keeping an eye on evolving regulations rather than economic trends.

“If the FMCSA does what they say they’re going to do, the probability is very high,” Perry said.

Still, in discussing the broader economy, Perry explained that trucking “should have muted expectations for this recovery.”

But the economic details are mixed: Automobile sales are high, but are no longer expanding; similarly, home sales are up, but expansion has slowed – and that’s from those recent, record low totals.

Likewise, the fourth quarter will likely take a hit from the impact of October’s government shutdown, expected to be as much as 0.5 percent.

“It will be interesting to see whether we can keep up the momentum,” Perry said.

And while few economists have recession in their forecasts, the historical trend suggests a downturn could be expected by 2016 – and any business plan should take that possibility into consideration, Perry cautioned.

Perry also continued to warn against the impact of the federal deficit, at more than 100 percent of GDP.

“The people who are concerned with reducing the federal deficit, at least in the long term, are on very solid ground,” he said – although he was quick to add that, in the short term, “it’s no big deal,” assuming policy makers do work to reduce it.

The upshot, however, is that Congress will continue to fight over the deficit but will not face any dire consequences for stalemate in 2014.

That assumes, he added, Congress doesn’t shut down the government for a substantial length of time, and that the financial markets don’t get “tired of the political wrangling” and downgrade the debt status.

“The most likely case is a lot of annoyance in Washington, but no real change,” Perry said.

Perry adds this recovery has been notably “unvolatile.”

“Even though we’ve had disappointing growth, we’ve had very stable conditions which makes easy to both invest and manage a truck fleet because you’re not trying to chase a market up or down,” Perry said.

But history says business can’t count on such stability. Individual quarters could see big swings, meaning the potential for some spot shortages in a sudden upswing, and unwarranted panic during a quarterly slip.

“My strong recommendation is that you keep your operations and your investment horizon flexible, because things can change rapidly, up and down,” Perry said. “That’s just a reality we have to deal with.”

Stability in the fuel market should continue, however. FTR’s forecast, which calls for a gradual but manageable increase “is on the high side,” Perry admitted, especially compared to analysts who anticipate a dramatic decline. Still, fuel prices could remain stable into 2016, which is “a very good news story” and one of the reasons for optimism about the economy.

(FTR Associates President Eric Starks will provide additional details on the economic outlook for 2014 at the CCJ Fall Symposium.) 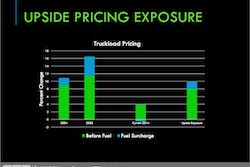