Lackluster GDP growth will hold down freight volumes in 2014, says a leading transportation economist, but tight truck capacity will support rates – and leave the door open for a capacity crisis should the US economy grow just slightly more than expected. Meanwhile, various January freight reports reflect the impact of shipping seasonality and some wicked winter weather.

‘Stay flexible.’ With the growth of U.S. gross domestic product hovering at the 3 percent mark, trucking can expect to see little improvement in freight volume for 2014, says FTR Senior Consultant Noël Perry. And while his forecast for the industry is “mildly optimistic,” Perry says any bump in the overall economy, combined with truck capacity that’s been running at near 98 percent, could be the “tipping point” that drives utilization above 102 percent and creates a capacity crisis to rival 2004.

However, Perry cautions that he’s expected an economic upturn and the “regulatory drag” on driver availability and productivity to have had much more significant impact on capacity for two years now – and so he’s “conservatively” predicting rate improvement in the range of 4 percent this year. The upside, however, is double that.

Similarly, Perry puts the odds of better than expected GDP growth versus lower growth at 2 to 1 – although that “downside exposure” will be an increasing concern in 2015 and 2016.

“The real exposure in in 2014 is, what if we all have a much better year?“ Perry says. “This is the year to stay flexible.”

For truckload, he sees tank truck volumes to continue to grow with the oil and gas development while flatbed will have another good year. And though dry van pricing was weak in 2013, Perry say the segment is “ripe for recovery,” and “where the action is” in 2014.

Additionally, trucking will benefit from continued steady fuel prices, and freight should get a bump in early spring as shippers play “catch up” following the delays caused by poor weather in the eastern half of the U.S. in January and February.

Perry’s remarks were the centerpiece of the latest FTR State of Freight quarterly update.

Recent spot market data, combined with increasing demand and a high number of trucking companies exiting the market, all seem to indicate that rates – both contracted and in the spot market – will continue to rise, the report says.

“We believe that persistent cost pressures, relatively tepid demand, soft pricing, increasing regulatory pressure, and a less robust used truck market have taken their toll on smaller carriers over the last two years,” says Donald Broughton in his January analyst report. As a result, the number of trucking companies that went out of business in 2013 exceeded that of the prior two years combined.

Additionally, total tonnage and average weight per load are both rising. In the fourth quarter of 2013, tonnage was up almost 10 percent over 2012.

However, the Cass Freight Index, a broader measure of freight trends, shows that North American shipment volumes and freight expenditures both continued the decline that began in December after the economy abruptly reversed direction near the end of last year.

“Although GDP figures for the second half of 2013 indicate that the economy is strengthening, this has not yet translated to the transportation sector,” the report says.

The number of shipments dropped 3.6 percent from December 2013, and was 2 percent lower than a year ago, according to the index, which also notes a seasonal “drop-off” can be expected. Still, January shipment levels are at the lowest level since 2010, with weather a factor.

Freight spending in January dropped 5.1 percent, according to Cass. The report attributes much of the decrease to decline in the number of shipments. Compared to this time last year, freight expenditures are up 1.4 percent.

“Movements in our freight expenditures index have been stronger than those for shipment volumes, indicating that there has been very modest growth in rates,” the report says. “The trucking sector is still unable to push rates up significantly, while the railroads have made more headway.”

More freight flowed into the spot market in both December and January as shippers and their contracted carriers struggled to meet capacity challenges caused by extreme weather, the report notes.

Year-over-year freight volumes were up 45 percent to a level not seen since October 2005, when pent-up demand in the wake of Hurricane Katrina drove volume to an all-time high.

Load availability in January rose 21 percent for both vans and reefers, while flatbed loads increased 33 percent, compared to the prior month, according to DAT. 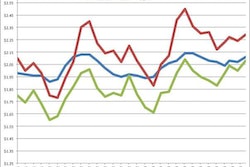 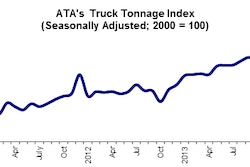 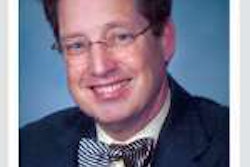 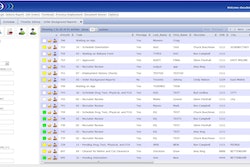 Breaking the bottlenecks of driver recruiting with technology