Provocative billboards are part of a $1 million media campaign by the Laborers’ International Union of North America pressing Congress to pass a long-term highway bill this year. (Images courtesy of LIUNA)

Not wanting to mess with success, the Senate Environment and Public Works committee delivered the policy portion of a six-year surface transportation reauthorization late Monday.

The plan essentially extends MAP-21 – the generally well-received current federal funding program – maintaining spending levels for highways and transit while allowing for increases due to inflation. Spending on federal-aid highway programs would grow from $38.4 billion in 2015 to $42.6 billion in 2020.

Along with the spending comes a call for “greater transparency” on the use of federal funds “to show taxpayers where their infrastructure dollars are being spent and reinforce public trust,” according to the EPW summary.

Additionally, the bill includes some adjustments to the federal freight program established under MAP-21, changes designed to make it “formula-based” and to expand flexibility for rural and urban areas – representatives of which have questioned the initial regional corridors – to also designate key freight corridors.

The EPW committee will review the bill and any member amendments Thursday.

The Senate Commerce, Finance and Banking committees will also have a crack at the reauthorization package, focusing respectively on how to pay for it and on its regulatory components.

The America Trucking Associations was still evaluating the proposal when reached by CCJ early Tuesday, but spokesman Sean McNally says ATA is “generally pleased” with the bill.

“We would prefer significantly higher funding levels, but we recognize the political barriers involved in finding those revenues. However, we hope that Congress will recognize the need for greater investment and provide additional resources as the reauthorization process moves forward,” McNally says. “ATA is pleased that the committee has given priority to funding highways with significant freight volumes by setting aside resources for these critical arteries. We are also pleased that the committee did not fall prey to the siren call of the tolling industry, and did not expand states’ authority to toll existing Interstates.”

The tolling option was featured in the Obama administration’s four-year version of the bill, received by Congress April 29.

And the administration is standing by its bill. Kicking off a busy week of scheduled appearances to drum up support for infrastructure investment, Transportation Secretary Anthony Foxx dropped in on a White House press briefing Monday to reiterate the message he delivered on a recent, similarly themed bus tour around the country.

“This may be the most dire moment the American transportation system has faced in decades,” Foxx said, explaining again the imminent collapse of the Highway Trust Fund. “Unless Congress acts, up to 700,000 Americans will lose their jobs over the next year in road work, bridge-building, transit maintenance.”

Speaking ahead the EPW bill’s release, Foxx added that the administration was “encouraged” by previews coming out of the committee.

“But again, we believe our bill is one that’s going to do dramatically important things for this country:  increasing investment, making sure that our country is moving forward with projects at a faster clip, and ensuring that we’re going to relieve some of these freight chokepoints that are going to become problems in the future,” he said.

Foxx declined to answer a question about the likelihood of a transportation bill being passed before the fall elections, and said that Congressional indecision and 27 short-term extensions over a recent 5-year stretch put communities at risk.

He also continued to push the administration corporate tax reform plan as a way to fund increased transportation spending, and again declined to weigh in on alternative user-funded models, such as a vehicle-mile tax.

As he had in a recent Senate hearing, the secretary downplayed the plan’s inclusion of language giving states the option to toll Interstates, calling any revenues “a smaller piece” of the White House proposal.

Sen. Tom Carper, chairman of EPW’s Transportation and Infrastructure subcommittee, said in a formal statement that he was “particularly proud” of the freight provisions in the Senate bill.

“Creating such a program is one of most effective actions we can take to support economic growth,” he said.

Carper also took that message to an Infrastructure Week gathering Tuesday, this one jointly organized by ATA and the Association of American Railroads.

Carper supports the ATA position that an increase in the federal tax on gasoline and diesel is a straightforward solution to the trust fund shortfall. Carper called for restoring the tax to the spending power from 1994 – the last time it was raised – and to index it to inflation thereafter.

And while an ATA Twitter post from the event referred to trucking and railroads as “friendly rivals,” a Monday opinion column in Transport Topics, the ATA trade publication, spelled out the mutual interests of the competing freight transport industries more explicitly.

“Intermodal: An Infrastructure Success Story,” attributed to ATA President and CEO Bill Graves and Edward Hamberger, AAR president and CEO, details the importance of both “cooperation and competition” in moving American goods efficiently.

“America’s trucking companies and railroads quite literally are the lifeblood of this economy,” they write in the piece. “Infrastructure Week has given us the opportunity to remind people that the success of many other industries is directly linked to the ability of the trucking and railroad industries to move goods and products to market across the globe.”

But trucks and rail are not the only odd couple coming together for the sake of a long-term transportation authorization: Big business and labor are also participating in Infrastructure Week.

“The United States needs a new path forward on transportation infrastructure,” said Tom Donohue, president and CEO of the U.S. Chamber of Commerce and a former CEO of ATA. “It’s time to create a contemporary and innovative infrastructure strategy: one that embraces the private sector and its resources, invites the introduction of desperately needed fresh ideas and concepts, and drives economic prosperity rather than holding back the jobs, opportunity, and growth we need.”

And a $1 million media campaign by LIUNA – the Laborers’ International Union of North America – likewise presses Congress to pass a long-term, full-investment transportation bill this year. The campaign includes provocative billboards (as shown above), radio ads, online tools and events and activities around symbolic props.

“For LIUNA, passage of a highway bill is about jobs, but, as with every American, it’s about ensuring the safety and reliability of our transportation systems,” General President Terry O’Sullivan said. “Another short-term patch, simply duct-taping the roads and bridges we all rely on, must be off the table,” he said. “To put the trust back in the highway trust fund, we must prevent further deterioration.” 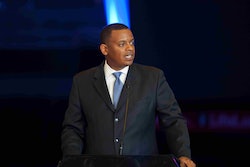 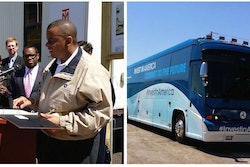