“It’s all about the money”

Not surprisingly, money emerged as the single-biggest driver concern and complaint. To put it bluntly, most drivers do not feel they are paid fairly for the job they do and are angered by the fact they feel compelled to spend long, uncompensated hours waiting to load and actually go to work, or are called upon to perform tasks that they are not paid to do.

The majority of company drivers surveyed, 30.1 percent, told CCJ that they initially went into trucking to “make a good living and provide for my family.” But many drivers feel wages have either flattened out or actually decreased during their time in the industry, and comments throughout the survey reflected this frustration.

Alarmingly, a quarter of company driver respondents reported that they made $35,000 or less last year, with one respondent remarking, “When a driver is on the road four weeks and gets three days with the family and has not made $4,000, it is an insult.”

Another commented, “There’s no money out there and too much nonsense. You make a little bit of money, and then you lose it right away by taking home time. It’s a waste of time with no life.”

[gtrow][gtcolumn size=”6″]
“Fleets need to pay a lot more and offer flexible time off,” another driver said. “We need to be able to have more than a 24-hour reset. Less paperwork. Needs to be wireless between shipper and receiver. Just give driver a confirmation number when delivered. Need truck stops with medical persons. Drivers get sick sometimes.”
[/gtcolumn][gtcolumn size=”6″]
A panel at the CCJ Fall Symposium in November will delve deep into recruiting and retention tactics. Click here to learn more or to register for the event.
[/gtcolumn][/gtrow]

Other drivers seem to be looking to break the conventional compensation setup by seeking out fleets with more progressive pay models. One driver reported, “I switched companies recently, and the hours are better and miles less. However, the new company is employee-owned and has profit sharing, so I will make more money than last year through bonuses and profit sharing after I am vested a year with the new company.”

At the same time, a clear theme emerged with older drivers feeling that their tenure, experience and safety records go unrewarded. One respondent noted, “I’d like a local job with excellent pay as well as medical, dental, vision and life insurance. But trucking just don’t pay the bills anymore, and greenhorns get as much as I do.”

Another company driver said, “I’ve been driving 21 years. The fact that I can go to a company with other drivers of, say, 5 to 7 years’ experience and make the exact same pay is not right. I’m not taking away from those guys. I’m sure they can do their job well. But experience is experience.”

A final takeaway on the income front: The survey shows that a clear majority of company drivers who responded like what they do and would prefer to stay in the industry, provided they’re making a good living. A majority of drivers, 32.7 percent, told CCJ they would be happy staying on as a company driver as long as their pay increases each year. Another 24 percent report they’d eventually like to buy their own trucks and go into business as owner-operators. A much smaller percentage, 10.9 percent, said they eventually would like to transition to a non-driving job in a fleet.

The upshot here seems to be that if flattened or inadequate wage issues can be worked out – problems, it should be noted, that are affecting the U.S. economy at large and in no way unique to the trucking industry – many drivers would be happy to continue working for fleets in some driving capacity.

Not as bad as military deployment – but close

Closely tied in with salary concerns was the natural desire to spend time at home with loved ones. Combined with the pain of missing important family milestones were more practical concerns such as keeping doctor appointments.

When asked to select one factor that most would influence them to change fleets or jobs, the majority of company drivers, 34.7 percent, unsurprisingly cited more money as a prime motivator. But interestingly, 16.9 percent said more home time, with another 16.9 percent saying more choices and control over the routes they are offered would motivate them to change fleets. It seems fair to assume that drivers wanting more control over their loads and routes feel they can affect both their income and home time more proactively by having it.

One driver summed up the connection between pay and home time by saying, “Driver pay is the number one issue in trucking, and home time is number two. Companies can’t expect a driver to stay away from his family for two to three weeks at a time for $40,000 a year.”

Another noted that, “Whether or not you see your home once every couple of months isn’t a concern for them. Any young person today who has the desire to marry and raise a family is immediately turned off by the prospect of being away from home for weeks at a time. It isn’t as bad on a relationship as deploying in the military, but it’s pretty close.”

While another grimly said, “Even when fleets find a qualified and experienced driver, the companies refuse to pay the driver a salary needed to provide for their families and save or take vacations or enjoy life beyond driving a truck.”

The respect factor is real

Talk to Byrd for any length of time, and the issue of driver respect will surface quickly. It’s an issue he is passionate about – both in terms of how drivers are regarded and treated by society at large today, and how they are treated in the workplace environment by their own fleets. As CCJ’s survey shows, his assessments are dead-on target.

When CCJ asked company drivers why fleets today are having a hard time finding drivers, 73.4 percent cited pay, and 67.6 percent felt that “fleets don’t respect drivers and the job they do.” These figures were mirrored almost exactly when drivers were asked why fleets have a hard time retaining the drivers they already have.

The comments section of the survey was overflowing with quotes from drivers citing a virtual onslaught of disrespectful behavior from all sides: Dispatchers, driver managers, dealerships, technicians, fleet managers, safety officers and executives all came under fire for seemingly not understanding and sympathizing with the difficult job drivers do.

“All the industry and DOT talk about is new technology (driverless trucks),” said one company driver. “The DOT consistently treats us like felons and lowlife trash. I must have a perfect record, no criminal offenses and go through TSA background checks to get and keep my job! We are sick of it!”

“I like travel, the people I meet and the places I go,” one driver said. “But some days I wish I was better paid and respected. Each year, my difficult job, the long hours and the time away from home weigh more heavily on me, although I do not believe I will ever be able to retire like my parents did. But I will certainly work until I can no longer hold the wheel and hoist myself into and out of the cab.” 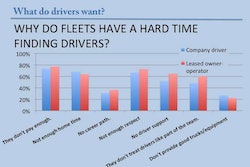 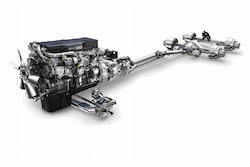