Supporting a more aggressive equipment and trade cycle is Jim Coffren, vice president of fleet management and maintenance for East Dubuque, Ill.-based Hirschbach Motor Lines  (No. 161 in the CCJ Top 250). Coffren argues that the differences in reliability and efficiency for vehicles produced before 2010 and those produced afterward are so pronounced that they are like comparing apples and oranges.

“As an industry, we got our butts handed to us on fuel economy as the EPA emissions regulations came into play,” Coffren says. “By 2007, the emissions benchmarks were out there, and fleets had to make choices about selling older and outdated equipment, pre-buying new equipment or simply holding on to what they had.”

Those who pre-bought in 2004 generally won and were on the right side of the equation technology-wise, Coffren says. “The 2007 pre-buy was a wash, and the fleets that pre-bought before 2010 lost big time because that’s when things turned around,” he says. “We finally saw great strides forward in terms of actual vehicle and engine performance.”

A critical factor in 2010, Coffren says, was a U.S. Supreme Court ruling that gave the U.S. Departments of Energy and Transportation the right to focus on definitive, permanent fuel economy standards. “That’s huge for this industry, because it forces OEMs to change their focus away from emissions,” he says. “They now have to chase fuel economy standards, and it forced them to take a systemic approach to overall vehicle design.”

As a result, today’s new commercial vehicles are improved vastly over pre-2010 models to the point where they easily can pay some – or even all – of their capital expenditures through fuel savings and reduced maintenance and cost per mile, Coffren says.

“Just look at the differences between a Freightliner Columbia and a modern-day Cascadia,” he says. “The Columbia was a great truck 10 years ago, but the Cascadia is an exponential leap forward in terms of technology and capability.” Coffren sees the same dynamic with Navistar’s redesigned International ProStar.

“Fleets are routinely getting 7.5 or even 8 miles to the gallon with modern trucks like that – and 10 miles to the gallon is now clearly within reach with just a little bit of work,” he says. Hirschbach’s newest Cascadias are logging an additional 5 percent fuel economy gain over its 2012 models on aerodynamic enhancements alone, Coffren says. “Numbers like that change the entire equation when it comes to equipment life and trade cycles.”

This point was driven home for Coffren in 2010 when Hirschbach undertook a complete rewrite of all of its fleet operations, including vehicle specifications, maintenance operations, vendor relations and driver relations. “Everything went under the microscope,” he says. “We made the decision to start replacing our existing 2007 through 2009 models with new trucks.”

Hirschbach then replaced 40 percent of its fleet. “The striking thing was that those new trucks were able to pay for their entire capital cost in fuel savings alone,” Coffren says. “The competitive advantage was huge. We’d never seen anything like that before, and that doesn’t factor in details like increased uptime and decreased maintenance costs.”

Coffren also points to other factors such as driver retention and downtime as mitigating factors in terms of vehicle replacement. “We believe the cost of having a truck down today is somewhere north of $400 an hour by the time all factors are considered,” he says, citing work he’s done with ATA’s Technology and Maintenance Council. “You have to run the math for every mile you’re not hauling, and the numbers get really bad really fast.”

Then consider the competitive disadvantage from running older equipment, Coffren says. “If you’re paying $6,500 a month for fuel, and the other guy is running a new truck and only paying $4,500 a month, then that $2,000 savings is covering his truck payment for him,” he says. “Plus, he’s got a newer, more comfortable truck that drivers want to be in.”

Coffren understands concerns about vehicle prices. “We are north of $140,000 on tractors, and I don’t like paying any more for trucks than I have to, either,” he says. “But if you look at the return on investment that new technologies are delivering today, the numbers work.”

With Hirschbach’s new-technology fleet, the company today is trading in trucks at about the three- to three-and-a-half-year mark. “It’s an interesting concept – take what you learned during the downturn, and stretch out new equipment purchases the same way,” Coffren says. “But I don’t think it works given the strong residual values at the moment, the fact that vehicle efficiency is increasing every year and the need to keep maintenance costs in check.” 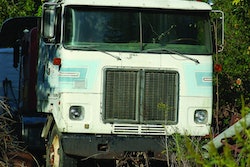 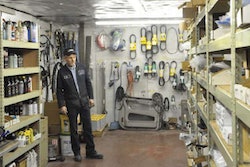