Adjusting to new changes in hours-of-service regulations is never easy for drivers and fleet operations, but here we go again. On Tuesday, Dec. 16, President Obama signed an appropriations bill that halted enforcement of the “new” 34-hour restart period enacted in July 2013.

CCJ reported on this legislation in detail, but the gist is this: drivers can revert back to the “old” restart, prior to July 2013, when drivers could refresh their hours more than once per week using a 34-hour break that did not have to include two consecutive 1 a.m. to 5 a.m. periods.

Now comes the hard part: putting it into practice. While many drivers are familiar with the previous method, they might need to ignore violations from electronic logging applications until developers update their software code. Three developers have already made this change.

Omnitracs and PeopleNet have also completed updates for their systems.

“Back in early 2013, we went through a thorough process and field tested with SEFL both the deployment of the new July 2013 rules as well as reversing them, just in case. This has proven fruitful and we were able to take advantage of it,” said Hass Machlab, chief executive of ISE.

Keeptruckin and BigRoad offer applications that run on the Android and Apple platforms. ISE plans to release an Android version in early 2015.

BigRoad quickly became the number one trucking app on Android since its first release in July 2012 with more than 160,000 downloads. It launched its Apple version in July 2013 and is the number one trucking app there as well. The app is a free download for drivers. Fleets pay a monthly fee of $15 per device to gain access to real-time electronic logging data. BigRoad has since added an onboard recording device to offer fully compliant electronic logs as per DOT 395.15 regulations.

The entire package is currently operating under a rental model, at $10 a month for the plugin hardware and $15 for the software.

Shoaib Makani, chief executive and founder of Keeptruckin, says the algorithm that it uses to process logs and detect violations is flexible and easy to update. Its cloud-based software platform can update its app instantly on all devices.

The company offers a free app to drivers and fleets. About 2,000 fleets currently use the logging application. They range in size from single owner operators to 250 trucks, he says.

Keeptruckin launched the first version of its electronic logging app about one year ago. The company was founded by Makani with funding from Google’s venture capital arm.

Keeptruckin currently offers the app for free in anticipation of the electronic logging devices (ELDs) mandate. It is betting that customers will upgrade to its ELD option when it becomes available in February, 2015. The company is building its own telematics device to synchronize its app with data from the vehicle. Its app will also interface with third-party telematics devices, he says.

The company will offer its ELD option to customers for no up-front costs with a subscription that will start at $20 per month and include electronic logs, vehicle tracking and IFTA reporting. A $30 subscription will include driver performance monitoring and vehicle diagnostics, he says.

Keeptrucking will also have an option for fleets to rent a ruggedized Android tablet for the display device. Drivers can also install the app on their smartphones.

Smartphones, tablets being utilized for low-cost compliance with ELD mandate 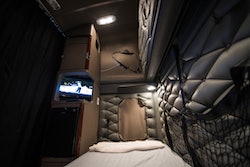 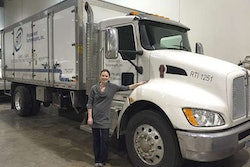