A roundup of trucking related crimes as reported in recent weeks by the Department of Transportation:

A U.S. district court has sentenced the owner of a Tennessee livestock transport company to a year’s probation for violating an imminent hazard out-of-service order.

Theresa Vincent, owner-operator of Terri’s Farm in Murfreesboro, was sentenced Nov. 21 in Nashville’s federal court, according to the DOT Office of Inspector General.

In June 2012, the Federal Motor Carrier Safety Administration issued an IHO to Ayache for unacceptable safety practices. Additionally that year, the interstate carrier had been cited in two accidents that resulted in the death of four horses. FMCSA had attributed the crashes to poorly maintained vehicles and fatigued or disqualified drivers.

Two months later, the agency issued an IHO against Vincent and Terri’s Farm after determining it was a reincarnation of Three Angels Farm. Vincent and Ayache had criminally violated the order by continuing interstate operations under the name and authority of Terri’s Farm.

Additionally, Ayache concealed and attempted to destroy emails and Vincent made false statements before a grand jury regarding her communications with Ayache during the investigation, the OIG stated.

The FMCSA issues an IHO when it determines a carrier is an imminent hazard. It can issue the order before an investigation, hearing, or formal proceeding to reduce the risk of harm that could occur before these processes are completed.

The agency defines imminent hazard as a condition that has a substantial likelihood of resulting in death, serious illness or injury, or is a substantial endangerment to health, property, or the environment.

Pope would sign the drug tests with the name of a medical review officer who had not worked at her company, Eastgate Laboratory Testing, for several years. She pleaded guilty to the charges in July 2014. FMCSA says it and the drivers who used her services “relied on the suspect drug test reports to demonstrate compliance with federal regulations.”

The operator of an Illinois-based trucking company pleaded guilty in December to fraud charges in a scheme in which he would “double broker” loads.

Dragan Simovski, operator of Freedom Transportation, Inc., was charged with wire fraud and mail fraud in April 2013. Simovski admitted that he, along with other co-conspirators, would negotiate contracts with companies, promising his company, Freedom, would transport the freight.

Freedom had no trucks, however, and would give the loads to a broker who would find companies to transport the goods.

Then Freedom would bill the customers as if it had performed the job. The DOT says the loss to the companies who actually delivered the goods was $532,000. 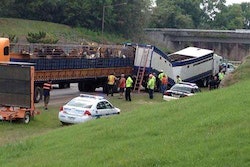 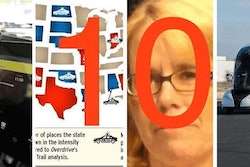