The 114th Congress is just days old, and already begun is the chorus of lawmakers pushing a fuel tax increase as the appropriate and common sense measure to end the highway funding hole the U.S. has found itself in of late.

Sen. Orrin Hatch (R-Utah), who now heads the Senate’s finance committee, said this week he is “open” to the potential for a fuel tax increase, according to an article from Politico. His committee is responsible for finding the funds for any highway funding bill that this Congress will produce — an issue it will have to face quickly, as the current highway funding patch expires in May.

Durbin and Hatch aren’t the only ones on Capitol Hill open to a fuel tax increase, and there are lawmakers who push strongly each session for one.

But will a fuel tax increase come to fruition in this Congress?

And as recently as December 4, President Barack Obama, said the issue “may be too complicated” for Congress to pass.

In the same speech, however, he noted the dire need of federal lawmakers to find a way to restore the revenue stream to the dying Highway Trust Fund, which has always been funded by fuel taxes.

The American Trucking Associations in recent years has openly advocated an increase in on-highway fuel taxes, including diesel, as a means to shore up infrastructure funding and try to give trucking companies better roads and a more efficient highway system overall.

Former ATA Chairman Mike Card, speaking at the Great West Fleet Executive Conference in 2013, said the trucking industry has pressed Congress to tax them more at the pump, as the potential for higher quality roads and infrastructure are worth. “Do it,” Card said his group has told Congress, “and give us the roads we need.”

If the leaders of the young 114th Congress are any indication of their intentions, however, the industry’s push for higher fuel taxes likely is done in vain. 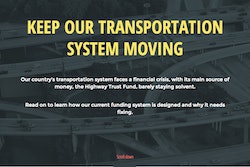 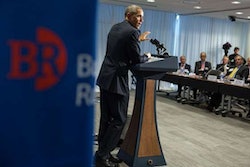