The average loss value per cargo theft incident in the first quarter of 2015 jumped 25 percent from 2014’s first quarter to $256,966, while the number of thefts fell, according to the quarterly cargo theft trends report from FreightWatch International.

A total of 191 thefts occurred in the quarter, FreightWatch says, marking a 14 percent decrease from the same quarter last year. Sixty-five of these incidents occurred in January, 60 in February and 66 in March.

“This is a continuation of the trend identified in Q3-2014 of a large rise in average loss value indicating that organized cargo thieves are targeting more lucrative shipments while many carriers continue to improve the security of their supply chain,” the report states.

Food/drink remained the most stolen product type in 2015’s first quarter with 31 percent of total thefts during this period. Products that were primarily targeted in this category include candy, cookies and snacks, meats, sodas, juices, teas and water, and canned/dry goods.

The electronics category continues to be the second-most stolen product type with 14 percent of the total in the first quarter, primarily consisting of televisions and displays, as well as software, components and peripherals.

Home and garden was third with 12 percent of the total, followed by metals with 11 percent.

New Jersey, typically fifth through ninth in the state rankings, reported the most thefts in 2015’s first quarter with 19 percent of the country’s total thefts. Florida was the second most active state as a result of the recent and persistent drop in theft volumes in California.

Arkansas made its first appearance in the top 10 states by earning 78 percent of its average annual total in just the first quarter.

Thefts involving theft of full truckload were most common during the quarter with 80 percent of all reported thefts.

Pilferage, a theft type utilized by organized cargo thieves and street-level criminals alike, accounted for 12 percent of total thefts in the quarter. 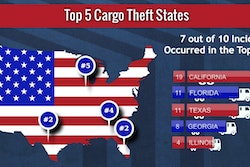