The operator of an Illinois-based trucking company who pleaded guilty in December to wire fraud has been sentenced in U.S. District Court in Chicago to three years in prison and three years supervised release. He was also ordered to pay $532,000 restitution in connection with an illegal double-brokering scheme, the DOT Office of Inspector General announced Thursday.

Dragan Simovski, operator of Freedom Transportation, Inc., was charged with wire fraud and mail fraud in April 2013. Simovski admitted that he and other individuals were involved in a fraudulent double brokering scheme, where they falsely represented that Freedom Transportation would use its own trucks to transport freight, knowing Freedom had no trucks.

As part of the scheme, he would enter into contracts with companies on behalf of Freedom, promising to transport their freight. He provided information about the freight loads to a co-conspirator broker knowing the broker would find other companies to transport and deliver the freight.

Simovski and the co-conspirator agreed Freedom would bill the customers if they had kept and performed the jobs, knowing in many instances they would not pay the companies that actually did the work.

The loss to the companies that actually delivered the freight was approximately $532,000. 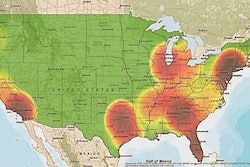