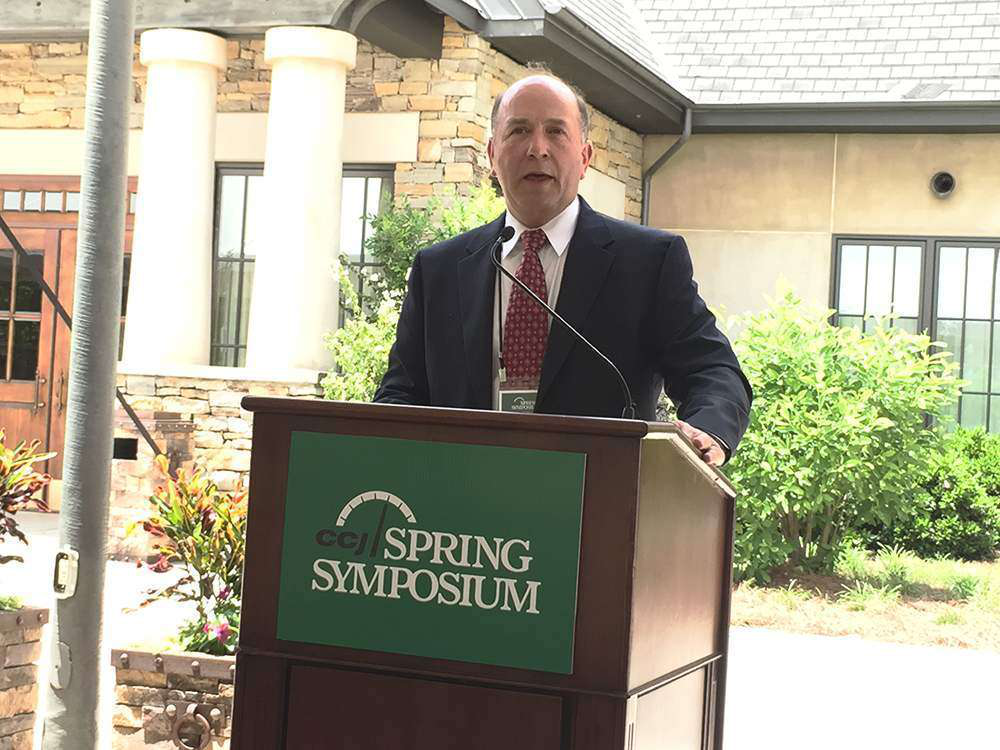 Keith Tuttle talks about the benefits of joining trucking associations and getting involved in the trucking community at the 2015 CCJ Spring Symposium in Birmingham, Ala.

“My charge to you is this: Don’t be the one who sits by idly while others are watching the past in the rearview mirror and setting a new course.”
— Keith Tuttle, TCA Chairman

“You’re either at the table talking about the issues or you’re on the menu,” Keith Tuttle, chairman of the Truckload Carriers Association, told attendees during a luncheon address at the CCJ Spring Symposium in Birmingham, Ala., on May 19. Tuttle, who is founder of Motor Carrier Service, a regional truckload carrier based in Northwood, Ohio, encouraged fleet executives to get involved in industry associations and to discuss trucking concerns with representatives at the local, state and federal level.

Trucking has a powerful story to tell, Tuttle said, citing:

Given those statistics, “are we doing enough work to inform the public that we’re a safe industry and that we care what happens to the planet?” he asked.

Joining industry associations and networking inside and outside of trucking can help solve a lot of issues, Tuttle said. For example, the recent revision to the 24-hour hours-of-service restart “didn’t just happen,” he said. He credits Barry Pottle, president and CEO of Pottle’s Transportation, Bangor, Maine, and his relationship with his congressman for helping to push through a bill that halts enforcement of the requirement that a drivers’ 34-hour restart include two 1 a.m. to 5 a.m. periods, as well as the once-per-week limit of the restart.

To help raise trucking’s profile, Tuttle encouraged fleet executives to support industry image campaigns such as Wreaths Across America, Highway Angels and Trucking Moves America Forward. “Many carriers that I know that are the safest, most profitable, and have the lowest turnover are involved in these image programs,” he said.

Tuttle said he has a reputation for being impatient with people who don’t do their fair share. “My charge to you is this: Don’t be the one who sits by idly while others are watching the past in the rearview mirror and setting a new course.”