Rhode Island’s top lawmakers have proposed a 10-year plan to fund repair of the state’s deteriorating infrastructure through adding a truck-only user fee on 17-20 bridges.

Gov. Gina Raimondo, House Speaker Nicholas Mattiello and Senate President Teresa Paiva Weed unveiled the RhodeWorks plan at a May 27 press conference. They did not provide an estimate of what truckers would be charged, only that the new fee would generate an annual $100 million.

Electronic tolling would be implemented for trucks with three axles or more on several bridges on Interstates 95, 195, 295 and 146 Routes 6 and 10. This new fee would be used to pay off a $700 million proposed revenue bond that would be obtained to reconstruct bridges and prevent additional bridges from further deterioration.

The plan is meant to address Rhode Island’s last-place status in bridge conditions. The funding formula would add a $1.1 billion and allow a total of $4.8 billion to be allocated to infrastructure repair, according to the RhodeWorks announcement.

“Beyond bridges, RhodeWorks also reflects a new commitment toward providing increased bus and rail service as well as funding for bike lanes and accessible sidewalks,” it stated. “It includes a proposal to construct an express bus lane as part of the 6/10 interchange reconstruction, and it seeks to attract an additional $400 million in federal matching funds for public transit.”

Other northeast states on the I-95 corridor already have user fees while Connecticut is considering it. Plan proponents cited the Pennsylvania Turnpike’s $182 fee and New York’s Tappan Zee Bridge $49 toll as examples.

In Rhode Island, only the state’s turnpike and bridge authority charge a user fee, applicable only for the Newport Bridge.

“If tolls are the solution to our infrastructure problems, in theory the northeast corridor would have the best system of roads and bridges in the country,” Matousek stated. 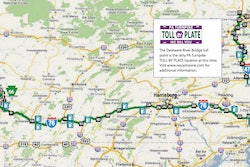 Tolls to increase for ninth consecutive year on Pennsylvania Turnpike 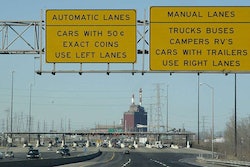