The committee is made up of representatives from the CDL training community, motor carrier and operator associations, an owner-operator and other stakeholders, and it came about last year to help hasten production of a driver training rule via a so-deemed “negotiated rulemaking” process with FMCSA.

The group recommended refresher training — rather than full re-training — for anyone whose CDL had been canceled, suspended or revoked and who was reapplying.

The future for any entry level driver training rule is uncertain, however. Given the final committee vote was non-unanimous, FMCSA only “agrees to use the Written Statement in any recommended regulation,” not adopt its terms necessarily in whole cloth in a Notice of Proposed Rulemaking.

The primary issue driving the dissenting votes appears to have been a requirement in the curricula for Class A applicants to complete 30 hours of behind the wheel driving on range or road, 15 hours for Class B applicants. Notably, the National Association of Small Trucking Companies voiced its dissent in the written statement itself, worrying the “vociferous advocates” for hours-based training would only keep up such advocacy and ultimately put a burden on new drivers in the form of ever-increasing hours requirements.

Thirty hours, NASTC said, “may represent the camel’s nose under the tent. The advocates for hours-based standards refused to hold off initiating efforts to increase the number of hours until actual data from real-world experience under the 30 hours could be gathered and analyzed. This display of bargaining in less than good faith was telling and indicated to NASTC that 30 hours is only the beginning.”

NASTC likewise tends to favor performance standards, it noted. A NASTC member survey conducted in tandem with the data-collection working group within the ELDTAC “demonstrated little connection between type of pre-CDL training received and driver performance. This was borne out in respondents’ actual crash data….

“It stands to reason that if one masters the basic skills and maneuvers satisfactorily in a pre-CDL environment, based on an individual’s performance behind the wheel, these new drivers would be somewhat better equipped to get through their first few years more safely and efficiently as commercial drivers. Performance in preparation generally translates into performance in action. Performance, therefore, would seem a more robust standard for entry-level driver training than hours.”

The American Trucking Associations, too, dissented. ATA believes “there is no scientific basis for an hours-based behind-the-wheel training requirement,” as noted in the organization’s dissent. ATA cites a 2008 American Transportation Research Institute study that concluded “no relationship is evident between total training program contact hours and driver safety events when other factors such as age and length of employment are held constant.”

Committee member and Owner-Operator Independent Drivers Association Regulatory Affairs Director Scott Grenerth believes supposed controversy over hours/performance-based standards may be less than it’s made out to be. He point to comments filed by the Commercial Vehicle Training Association, included in the committee’s statement, that “are perfectly on the point,” he says. “The 10 pages of curriculum which the committee carefully put together is 10 pages of performance-based requirements” for the Class A CDL. The entry-level driver “must demonstrate competency for all of the skills covered in those 10 pages in order to be permitted to take the road skills test for their CDL license.” That, at its most basic level, “is performance-based!” Grenerth exclaims.

The bare-minimum-effort requirement of 30 hours, he adds, “allows the FMCSA to have something to back them up during enforcement of training providers. Otherwise, a dishonest training provider could spend a few hours with a student, just to the point where the student could pass the road test, and claim they met the minimum requirement. There are ‘CDL mills’ doing this today. The 30-hour minimum requirement is one aspect the ELDTAC came up with to try and put an end to those types of programs.”

Today’s “legitimate training programs,” he believes, that “go far beyond ‘teaching to the test’ greatly surpass 30 hours and will not see that requirement as a burden.”

On the subject of whether FMCSA could be expected to actually follow through on a driver training rulemaking, Grenerth had this to say: “They backed it whole-heartedly without hesitation.”

Read the full ELDTAC written statement, including dissenting comments, at this link. 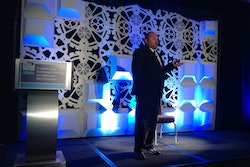