One surprising trend over the past few years has been the unprecedented market share growth of automated manual transmissions. Many OEMs now are reporting AMT take rates that would have seemed improbable when the first units appeared on North American shores.

Volvo, Daimler Trucks North America and Paccar all report AMT specifications in more than half their tractors sold so far this year. In April, Con-Way Truckload announced it was purchasing 635 new Class 8 tractors – all spec’d with AMTs.

While some drivers remain resistant to AMTs, every year more are won over by their ease of use and additional safety advantages. Fleet managers have found them to be largely bulletproof in terms of overall durability, performance and decreased maintenance costs in terms of clutch replacement. OEMs say that AMTs by themselves can deliver a fuel economy increase between 5 and 7 percent for a Class 8 linehaul tractor depending on application – another benefit enjoyed by fleet executives.

Now there’s a new wrinkle to the AMT proposition. Integrated powertrains were born out of the ability of vertically integrated OEMs to design diesel engines and AMTs that communicate electronically using sophisticated proprietary telemetry to further optimize the fuel economy advantages offered by AMTs.

Other OEMs and component suppliers saw opportunities to offer similar systems, and soon cooperative partnerships with proprietary code sharing sprang up between Eaton and both Cummins and Paccar.

Fleets quickly recognized the advantages of integrated drivetrains. “Almost three-quarters of the trucks we sell today have integrated drivelines, and acceptance is still growing,” says John Moore, product manager of drivetrains for Volvo Trucks. “The product was launched in 2007 with limited production in the first year, so we reached this level in approximately six years.”

“Today, we’ve actually got a few drivers who only drive AMTs, so it’s made it much easier for us to find drivers,” Tomlinson says. “But even the old guys who didn’t want an AMT really like and enjoy driving with them now. And, of course, there’s a significant safety enhancement involved with AMTs as well.”

While Tomlinson doesn’t yet have solid break-in numbers on his initial AMT units, he posted fuel economy improvements compelling enough for South Shore to commit to Volvo’s integrated drivetrains for its latest tractor purchase.

“Our thought was that we were dealing with two products designed and built together, therefore they would ‘talk’ well together,” he says. “We’re also going to try some Daimler drivetrains, and it’s the same deal.” He believes Detroit’s DT12 AMT was designed specifically to complement the current Detroit diesel engine series.

For either product line, Tomlinson says that if programming issues come up, “I wouldn’t have two different guys pointing fingers at each other on my hands. In the past, we’ve had issues getting different companies on the same page when we’ve had problems.”

Fleet demand is one reason that Ryan Trzybinski, product strategy manager for Eaton, sees a bright future for integrated powertrains. He says his company has been integrating its line of automated products with every major engine supplier in North America for more than a decade.

“During that time, market acceptance has grown every year, so we have a very good feeling about where the technology is going,” Trzybinski says. “When you take into account the fact that we are already deeply integrated with multiple engine makers, including those made by Cummins, Navistar and Paccar, the future looks very bright for integration. Soon, vehicle telematics systems are going to help make that acceptance even more obvious to our customers.”

Under the same roof

Moore says integrated drivelines help maximize the AMT’s inherent advantages by using proprietary data communication protocols between the engine and the transmission to enhance a tractor-trailer’s drivability and fuel economy. This is the core of the vertically integrated approach espoused by both Daimler and Volvo.

“The Volvo engine and Volvo I-Shift automated manual transmission are designed to speak the same language to achieve common project goals set by Volvo engineers,” Moore says. The transmission “knows” the efficiency map for each engine rating, and by continuously monitoring vehicle speed, acceleration, torque demand, weight, grade and both rolling and air resistance, the transmission predicts and selects the engine’s most efficient utilization, shifting gears to match conditions to the engine’s efficiency map.

“This level of teamwork between components is a big advantage of the integrated driveline,” Moore says. The I-Shift’s sensor pinpoints the grade and helps determine which gear to select first, where to put the shift points and if it can skip-shift.

“When one company can design, build and support an entire powertrain, there are really no barriers to what can be done,” says Tim Norton, product manager of powertrain marketing for Daimler Trucks North America. The Detroit DT12 transmission’s shift points are matched to fuel maps in the Detroit engines to ensure the engine always is operating as efficiently as possible and that the transmission never hesitates to find a gear.

“These are just a few examples of what we can achieve by integrating components,” Norton says.

Not surprisingly, Eaton has a different opinion on the importance of vertical integration for these advanced drivelines.

“We have always worked with multiple engine makers and to this day continue to have ongoing conversations with all of the OEMs,” Trzybinski says. “That gives us an inherent understanding of where the market is going, where the technology is going, where integration is going, and how our transmissions can be designed to take advantage of all of that, both today and into the future.”

Trzybinski says the technology partnership that his company has with Cummins, and the success of the subsequent Cummins-Eaton SmartAdvantage powertrain, is the latest example of how Eaton’s diversity benefits both companies’ mutual customers. “It isn’t the only example,” he says. “We have been able to take from that and what we have learned from that and apply similar technologies with other engine makes, including the Paccar MX13 and Navistar N13 engines.”

Regardless of which design approach OEMs choose, they are convinced that integrated powertrains will remain the spec of choice for fuel-conscious fleets.

“When we launched the DT12 transmission, we said it makes all the drivers in the fleet perform like experienced pros,” Norton says. “Intelligent Powertrain Management goes beyond what even the most experienced driver can do – by proactively preparing the powertrain for upcoming terrain that the driver may not even see.”

These functions can be new and different for drivers. IPM is programmed to drop speed before a hill’s crest in anticipation of the upcoming downhill. “Drivers may think their cruise control has stopped working, but IPM knows the speed will be made up on the downgrade,” Norton says. “As advanced electronics and powertrain technology like this become more commonplace, it is very important for fleets and drivers to understand the benefits and let the truck perform the way it was designed.”

Trzybinski says customer observations are critical to further enhancements. “We have been getting a lot of feedback on better and smoother shifting,” he says. “As the communication between the engine and transmission keeps getting better, we are also hearing reports on vehicle performance benefits because the shift decisions are more precise and more accurate.

He says Eaton’s other products that aren’t yet as deeply integrated also benefit from these technologies, especially in terms of fuel efficiency gains.  “All of these new advancements are going to have a positive effect on everybody.” 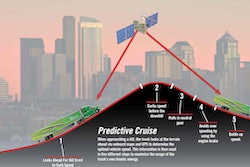 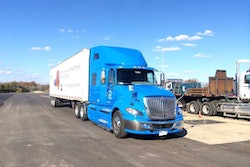 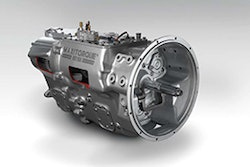 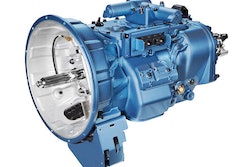 Manual transmission twilight? After decades of dominance, they could be relegated to special status soon