Federal researchers say adverse weather costs trucking $3.8 million annually, with ice and snow responsible for more than half of all time lost to traffic slowed by weather.

Bad weather’s negative effect on speed extends beyond the time conditions such as fog, floods, winds, rain and extreme temperature exist, the Federal Highway Administration reported July 18. Moderate decreases in speed occur up to four hours after adverse weather and speed drops slightly in the hours preceding it.

The agency assessed weather’s effect on freight in 13 diverse regions as a follow up to its 2012 national estimate of weather delays affecting trucking. The new analysis indicated a somewhat lower national cost estimate than the previous study’s $8-9 billion estimate.

Still, the limitations of the methodology and data should be considered, the researchers cautioned. The association of traffic speeds with weather based on county means speeds on a given roadway are not always directly impacted by the weather event. Also, an 8-hour timeframe was used for each weather event instead of the actual time the weather lasted.

The researchers studied 1,500 miles of road or slightly less than 1 percent of the National Highway System. The locations studied were Atlanta; Chicago; Columbus, Ohio, Denver, 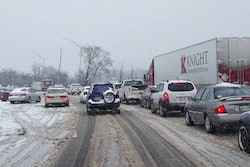