According to CargoNet, 61 percent of reported thefts had a loss value recorded, and the average incident was valued at $330,339 – up $63,243 from cargo theft incidents reported in 2015’s second quarter. Eight recorded cargo thefts in 2016’s second quarter were worth $1 million or more, and one in particular was worth $8 million.

The most common place for thefts to occur was in warehouse or distribution center locations with 53 thefts in the quarter. Unsecured yards were second-most common with 29 thefts. Fifty-nine percent of unsecured yard thefts occurred in Texas and California.

Cargo theft incidents in California climbed 86 percent year-over-year, and $17.4 million of the $38.9 million stolen in the quarter was stolen in California. 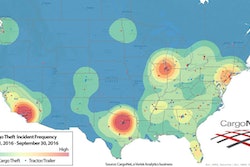 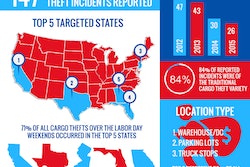 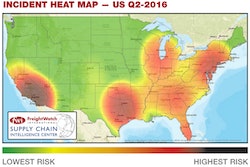