Spireon grew revenue 20 percent year over year for the first half of 2016, and more than doubled its profitability.

A recent report from analyst firm C.J. Driscoll & Associates estimates that the U.S. mobile resource management (MRM) market will expand to over 14 million units, and MRM hardware and service revenues will grow to over $4.7 billion.

Spireon’s says that revenue from its Fleet businesses during the first half of 2016 grew 27 percent while total contract value for this segment increased 70 percent. Spireon’s Enterprise Fleet, Trailer and Transportation segment growth was fueled by new offerings that include Spireon’s FleetLocate Temperature Monitoring product and Spireon’s Driver Performance Program. 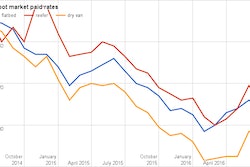