That means the demands of an engine’s cooling system are about to change along with the leaves, and proper coolant maintenance – including checking levels and concentration – is the best way to keep the frost on the pumpkin and out of your radiator.

Colin Dilley, director of technology for the Prestone Technology Center, says how you check the coolant level depends on the age of the truck.

“Specifically, does it have an overflow tank,” he says. “For trucks with antifreeze reservoir tanks, the level should be at the cold level line marked on the tank. For older vehicles without a reservoir tank, with the engine cool, remove the radiator cap and look at the fluid level in the radiator. The level should be about one inch below the filler neck in the radiator to allow space for expansion when the coolant gets hot.”

“When the cooling system gets hot, and the coolant expands, the coolant runs out on the ground through the drain,” he says.

The easiest way to tell if you might need to replace your coolant is by visual inspection, Dilley adds.

“If the truck is equipped with a coolant reservoir tank and the fluid in the tank is discolored and/or stained, there is likely an issue,” he says. “If the coolant is discolored, remove a coolant sample and test. Additionally, if there are viable signs of contaminants it is likely time to replace the coolant.”

Jim Wakeem, senior development engineer for Dayco, adds hoses should be inspected closely when servicing any coolant system component, like the water pump, thermostat, radiator and coolant filter or when adding coolant and inhibitors.

The hose inspection process, Cleveland says, doesn’t change between winter and summer months, but depending on the type of driving a person is doing he advises keeping in mind inspection intervals may increase with more idle time during the winter.

“The cooling system is designed for the products to be replaced at about the same interval,” he adds. “When servicing the vehicle keep in mind that when you open the cooling system for replacement of other parts, look at the hoses internally as well.”

Coolant contamination is harmful to engine cooling systems, and Cleveland says when replacing components it is good practice to flush the cooling system entirely.

“Flushing a system removes contaminants, which is the only way to verify a clean system and long service life of all components, including the hoses,” he says.

Even if your route planning doesn’t take you through the heart of winter’s icy grip, Dilley says proper system maintenance is key to optimized performance regardless of weather.

“Even those who work in southern climates pass over mountains that often reaching freezing conditions and even high deserts will drop below 32 degrees on some nights,” he says. “However, and more importantly, maintaining the optimal freeze point for your coolant is exactly the same as maintaining the optimal boil-over point. A mixture of 50/50 concentrated antifreeze coolant and water gives you boil-over protection and freeze protection.” 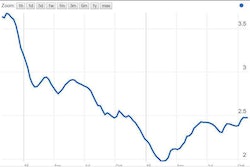