Proponents say the measure could shore up funding for state rest stops and ensure their truck parking spaces remain in place.

Truck stop owner advocate group NATSO, an opponent of rest area commercialization, said in an email to members this week that even though Banks does not sit on the House Transportation and Infrastructure Committee, the group “takes this threat to the long-standing prohibition on commercial rest areas very seriously.”

The group reportedly obtained a letter circulated on Capitol Hill that states Banks’ legislation is meant as a means of generating infrastructure funding for states. NATSO said that while the legislation would help states increase infrastructure revenues, the bill would also allow states to appropriate the funds as they see fit. 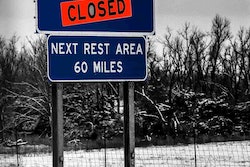