The number of trucks involved in fatal crashes increased by 8 percent from 2014 to 2015, according to the latest statistics from the Federal Motor Carrier Safety Administration.

The agency’s Large Truck and Bus Crash Facts 2015 report reveals that 4,050 large trucks, those weighing more than 10,000 pounds, were involved in a total of 3,598 fatal crashes in 2015. The large truck involvement rate per 100 million vehicle miles traveled by large trucks also increased by 8 percent from 1.34 to 1.45, the report states.

In total, there were approximately 415,000 police-reported crashes involving large trucks in 2015. One percent of them resulted in fatalities, while 20 percent, or 83,000, resulted in injuries of some sort.

In a breakdown of crash types, single vehicle crashes with trucks, which involved a bicyclist, pedestrian or non-motorized vehicle, made of 20 percent of all fatal crashes, and the majority (64 percent) of fatal crashes involving large trucks were two-vehicle crashes.

FMCSA’s report states there were 3,996 truck drivers involved in fatal crashes in 2015. Of those, 206 were 25 years old or younger, and 211 were 66 years old or older. Additionally, there were 667 truck occupant fatalities, a 2 percent increase from 2014, of which 89 percent were the drivers of the trucks.

Of all fatal accidents involving trucks, 60 percent occurred on rural roads, while 25 percent were on interstate highways. 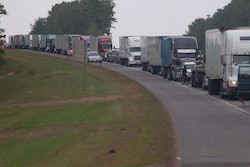 Truck drivers led all occupations in workplace fatalities in 2015