In sum, Schneider sold about $550 million worth of stock, with the remainder after the $288.4 million going to Schneider family shareholders.

In its IPO, Schneider gave underwriters a 30-day option to purchase up to an additional 4,342,000 shares at $19 per share to cover any over-allotments. This typically happens when demand for shares is high and shares are trading above the offering price.

Schneider made about $4 billion in revenue last year. Its net income was over $150 million, according to the company’s filing with the Securities and Exchange Commission. 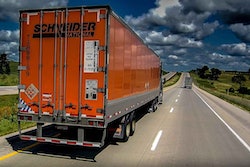