Did we just get our first unauthorized look at Tesla’s semi?

I’m not a Reddit user. Maybe I’m not hip enough or maybe I just “don’t get it.”

But someone who apparently does get Reddit may have accidentally stumbled upon the electric semi that Tesla is expected to unveil later this month.

I asked Tesla Tuesday about the photo and its authenticity. Their spokesperson told me that the company’s policy is “to always decline to comment on speculation.”

So, we don’t know for sure what this truck is or is not. What we do know is that the original post was deleted and reposted by another user.

The pictured tractor – which, admittedly, could be anything from Elon Musk’s next plaything to something built by a hay farmer in Kansas – does bare some resemblance to the rendering Tesla itself released several months ago.

Other than the pic, there’s not a lot of useful information in the Reddit post aside from, “User posted pic, said got it from a friend who was at an undisclosed place in California where they test Tesla vehicles.”

If you asked me to sketch out my idea of what the Tesla truck may look like, I’d probably come up with something that looks a lot like the picture. I would have made the roof taller but, in the main photo, there appears to be a roof fairing on the ground. Maybe it’s been taken off for transport.

The most obvious thing missing in the picture is the truck’s grille. That all but seals the deal that there’s some kind of unique powertrain under that deep sloping nose. You can’t make out any marker lights but in Tesla’s earlier rendering, those looked like they might have been integrated into the top of the windshield. There are no steps visible, making it hard to tell exactly where the door is assuming there is one on the passenger side. If it’s there at all, it’s almost certainly in that middle panel, which would seem to put the cab entry-point behind the seats.

A pic from an Area 51-esque “undisclosed place in California where they test Tesla vehicles.” Check.

The original photo is low resolution but I’ve zoomed in pretty tight a couple hundred times looking for clues. There are no visible Tesla logos, so I’m going to stop short of telling you what this pic is other than a pretty cool looking, three axle … something.

The rise of the next-generation truck OEM 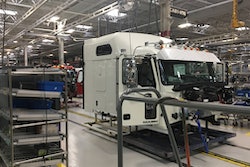 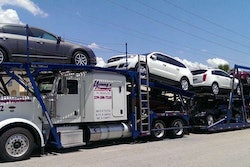