The trucking industry has a story to tell, says Kevin Burch, outgoing chairman of the American Trucking Associations, but, he says, the industry hasn’t in the past done its duty to make that story known to lawmakers, regulators and the public at large.

Initiatives taken this year by Burch’s ATA intend to change that, he says.

Such efforts were on national display last week when President Donald Trump spoke to a crowd of fleet executives, drivers and other industry personnel — organized by ATA — on the merits of his tax reform plan at a stump speech in Harrisburg, Pa. About 200 trucking industry personnel were in attendance at the event, says Burch.

Burch not only attended the speech but was mentioned by name by Trump during the address. Burch, said Trump, is a would-be beneficiary of the administration’s proposal to cut taxes on small businesses. “He wants to create more American jobs. We are helping him do exactly that,” Trump said.

Burch spoke to CCJ in an exclusive interview this week about Trump’s speech, ATA’s push to make its story heard and ATA’s chief lobbying efforts for the current Congress and administration. “We need to tell people how vital and how essential the trucking industry is,” Burch says. “The president has helped us tell that story to people. We made it clear to the White House staff [earlier this year] that we move America’s goods and we’re vital to all the things he’s trying to do.”

“It’s refreshing,” says Burch, to hear the president use words like “heroes” to describe those in the trucking industry. Burch is the president of Jet Express, a roughly 330-truck fleet that hauls loads for the automotive industry. He’s worked in trucking for north of four decades.

In addition to the shout-out during Trump’s speech last Wednesday, Burch also greeted the president personally after he deplaned from Air Force One and was in attendance a day later at the signing of an Executive Order that, in part, aims to make it easier for trade groups and associations to provide health insurance plans to small businesses.

ATA’s support for the Executive Order on healthcare doesn’t signal the group’s intentions to enter the realm of insurance providers, says Burch. But it represents the group’s push for broader healthcare reform that, like tax reform, could benefit trucking companies, says Burch. “We feel it’s going to help our members,” Burch said of the Executive Order. “The health of our drivers is important. We want quality healthcare for our drivers. The safety and health of our drivers should supersede anything else and has always been our priority.”

Trump’s speech last week to trucking industry reps grabbed national headlines, including a segment on Fox News, in which Burch was interviewed on the popular Fox & Friends morning show. He talked to host Steve Doocy about, in addition to tax reform, the need for the industry to attract the industry’s next generation of drivers and technicians. See Burch’s interview on Fox News above.

In addition to tax and healthcare reform, Burch says ATA is still hoping to see Congress act on language to prevent states from enacting laws that require carriers to provide paid meal and rest breaks to drivers. The so-called Denham Amendment has been in the works for several years, and ATA is a strong advocate, as are other trade groups. The provision intends to protect carriers from being required to pay drivers for non-driving tasks, following several costly and controversial court rulings in recent years.

Seeing through an infrastructure funding package is also a top priority for ATA, Burch says. “We have deteriorating roads and we have terrible congestion,” he says.

Burch’s chairmanship lasts through next week, when he’ll hand the reins to David Manning, president of TCW.

Burch encourages all members of the trucking industry to get involved, no matter which side of the issues they fall on. “People think that you can’t make a difference in Washington. I think that’s a lie. We made a difference with hours of service. We got a win. It took a while, but it does make a difference to be involved. I’m an optimist, but the system doesn’t work unless you get involved in it.” 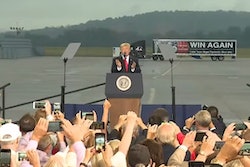 Trump to trucking: Tax reform a boon for carriers, drivers and industry at large 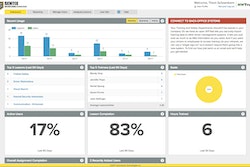