The availability of qualified truck drivers now ranks as the top concern for trucking companies, according to a report issued Monday by the American Transportation Research Institute, displacing the electronic logging device, which ranked No. 1 in 2016’s report, as carriers’ top issue. ATRI produces a Top 10 list of the trucking industry’s chief concerns each year. The report also includes strategies the industry can use to tackle these 10 pressing issues.

This is the first time since 2006 that the driver shortage has ranked atop ATRI’s annual Critical Issues in the Trucking Industry, which is based on a survey of motor carriers and other industry personnel. More than 1,500 industry stakeholders, including carriers and drivers, responded to this year’s survey. Of the respondents, 21 percent said the driver shortage was their top concern. Another 10 percent ranked it as their second top concern, and 8 percent scored it as their third highest concern. “An optimistic trucking industry outlook, based on improving economic growth in the United States, has many in the industry concerned that the demand for truck drivers will further outpace the supply of qualified drivers,” ATRI notes in its report.

Strategies to tackle the driver shortage, says ATRI, include partnering with states and the federal government to “develop a graduated CDL program to attract safe, younger drivers” and to “formalize a national truck driver recruitment program.”

The ELD mandate ranked second, falling from the top spot. Eighteen percent of survey respondents said it was their chief industry issue, with 9 percent ranking it second and 6 percent ranking it third. “Given that the ELD Mandate ranked as the second-biggest issue facing the industry in 2017, it is clear that many in the industry remain concerned about the costs associated with deploying ELDs, what deployment will mean for industry productivity, and how the data collected will be used beyond [hours] compliance, while others are concerned that the implementation window will be further extended,” says ATRI’s report.

Hours of service regulations took the third spot in ATRI’s Top 10 list, which ranked No. 1 in 2015’s survey. The U.S. DOT’s decision to ultimately rescind 2013-instituted regs regarding drivers’ use of a 34-hour restart eased some of the concern surrounding hours of service, ATRI says, but it remains a top industry issue “due in large part to the industry’s desire for increased flexibility in the rules,” the report notes. A chief strategy for mitigating concerns about hours of service rigidity is to continue to press for split sleeper berth flexibility, says the report.

Rounding out the top 10 are:

*Trucking parking, No. 4: The growing scarcity of available truck parking creates a dangerous and costly situation for truck drivers who are often forced to drive beyond allowable HOS rules or park in undesignated and, in many cases, unsafe locations,” ATRI’s report says. “The truck parking issue may gain greater attention once the ELD mandate is in effect. ATRI says the industry needs to continue to encourage state and private investment in parking facilities and to educate the public on the “safety consequences resulting from closing parking facilities.”

*Driver retention, No. 5: Though related to the driver shortage, retention “remains a separate issue,” says ATRI’s report. Driver turnover has surged this year, and carriers are attempting to retain drivers with new retention programs and bonuses, the report says.

*CSA, No. 6: While still a Top 10 issue, actions by Congress in recent years to scale back the program’s publicly available scores have mitigated some of the industry’s concerns. FMCSA has also undertaken a study to try to implement crash accountability into CSA.

*Regulations, No. 7: “The costs associated with regulations continues as a top 10 concern for the industry,” says ATRI, despite falling from its spot in the top 5 in recent years.

*Infrastructure and congestion, No. 9: “Poorly maintained roads and traffic congestion create wear and tear on vehicles, waste fuel and increase emissions, create additional stress for drivers, and negatively impact industry productivity.” ATRI says the industry needs to continue to advocate for a long-term highway funding fix at the federal level and a national freight plan that identifies freight bottlenecks and works to mitigate them.

*Driver health and wellness, No. 10: “In addition to obvious lifestyle benefits, an improvement in driver health may also have positive implications for industry safety as research has identified a
positive correlation between driver health and driver safety,” according to the report. ATRI says improved driver health would also help with driver retention. 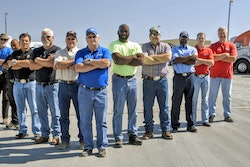 Stay Metrics: Q2 driver turnover much lower for carriers that use rewards, surveys 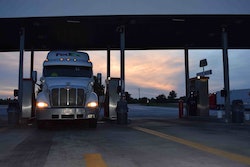