This is the second part of a two-part series on a nationwide uptick in truck inspections, and a corresponding rise in the number of clean inspections. See the first part here:

The growth in clean inspections shows “a trend toward inspectors starting to complete the violation report” when it shows no violations, says Colin Mooney, executive director of the Commercial Vehicle Safety Alliance.

He and no doubt many carriers view that trend, somewhat reflective of a change in enforcement practices, as certainly “something that we want to continue to encourage” since clean inspections help a carrier’s Compliance Safety Accountability scores.

From the perspective of an active enforcement department, however, it’s not that black and white. Arizona Capt. Brian Preston says incentivizing clean inspections as a general rule isn’t something he wants to actively encourage among his state’s Department of Public Safety officers. While he also doesn’t want to encourage officers to not turn in inspections where they don’t find a violation, he views his department’s priority to be finding problems that need correction.

He makes an analogy to driving-under-the-influence enforcement. “Send a guy out on a Friday night and tell him to go out there and look for DUIs, and he doesn’t come up with any – I’m only really concerned if there were in fact DUIs happening somewhere, and we didn’t find them.”

The same concept applies to truck enforcement, he says. “If you did 20 inspections and didn’t find a violation, maybe we need you to work different locations or go through some new training.”

Targeted, effective enforcement are the watchwords there, and Arizona’s no slouch. It ranks No. 4 in violations per inspection found, and its clean inspections percentage is the 14th lowest in the nation. However, that percentage is moving higher at a rate that beats most states, which you can see illustrated in the bottom map on page 40.

The prevalence of clean inspections in Arizona increased by almost 20 percent in 2016 over the previous year. Preston says the national nature of that rise in prevalence across many jurisdictions may well indicate more about drivers’ practices than about the nature of enforcement. Attitudes toward compliance are changing fast, he suggests, as more businesses large and small are buttoning up their operations. 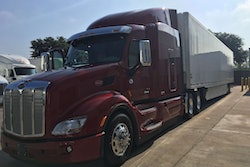