Level 4 autonomy (on a scale of 1 to 5) doesn’t require any action by a human driver and is widely considered the first level of “fully autonomous” driving.

“[LiDAR] is powerful in that you can get your perception problems solved very quickly … however, the perception quality of LiDAR is lower resolution and the sensor itself is very expensive and doesn’t have the range that we can get from our [camera] sensor,” he says. “We don’t believe any competitors can launch a commercial product with a LiDAR solution. It’s too expensive, too fragile and they don’t see far enough. It will take years to commercialize a system based on LiDAR. Those sensors are not ready for production and they won’t be for a number of years. We think that we are closer to commercialization than any of the competitors.”

Price says the truck can “see” to within four inches on the road and 360 degrees around the truck while its HD mapping provides precise lane-level information.

The company’s goal, Price says, is to deploy a system that allows fleets to travel autonomously dock-to-dock, bypassing needing a driver – either in-cab or remotely – to pilot the truck on any stretch of its route.

“Our Level 4 system is fully automous end-to-end,” Price says. However, since regulations in most states require a person in the cab, TuSimple deploys a driver with its units.

Later this year, Price says TuSimple will begin hauling freight with a fleet of 25 trucks through its shipper partners, allowing the company to develop a real-world testing platform.

“We will be generating revenue, hauling freight, with the retrofit autonomous vehicle by the end of this year,” he says. “Our goal is to provide as reliable a service in delivery as compared to today.”

The TuSimple platform is also designed to detect faults – like low tire pressure or temperature warnings – and pull itself over before signaling a designated resource for help.

Last year, TuSimple secured $23 million in a Series B funding round, and the company raised an additional $55 million of Series C funding in November. 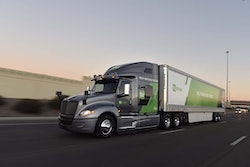 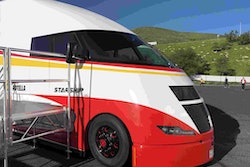