Virginia Gov. Ralph Northam announced this week a legislative proposal will be introduced in the state’s General Assembly to toll I-81 through the state to fund improvements along the corridor.

According to a press release from Northam, the proposal would establish limits on toll rates and give automobile and small truck drivers the option to purchase an annual pass for unlimited use of I-81 for a fixed rate.

Northam did not specify what the toll rates would be for cars and trucks on the 325-mile stretch of interstate. However, the I-81 Corridor Improvement Plan submitted to the General Assembly in December by the Commonwealth Transportation Board noted that tolls on heavy commercial vehicles would not exceed 17 cents-per-mile.

At that rate, the cost for a truck to travel from one end of the state to the other on I-81 would be around $55 during daylight hours. The toll rates would be discounted overnight to encourage truckers and other travelers to travel at less-busy times.

The Commonwealth Transportation Board discussed a number of ways to find improvements to the I-81 corridor, including trucks-only tolls and fuel tax increases. The December final plan submitted to legislators included tolls for both cars and trucks. The legislation is expected to be introduced during the January legislative session, and it will have to be passed by the state’s House and Senate before tolls could be implemented.

The tolls will pay for an estimated $2.2 billion in projects along the I-81 corridor, including widening the interstate in some areas, efforts to more quickly clear crashes, message boards to warn drivers of crashes ahead and more. 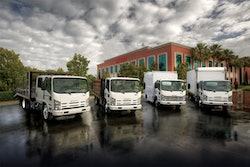