One day after school last year at Patterson High School in Patterson, Calif., a parent approached teacher Dave Dein. “He spoke broken English,” Dein recalls, “but he said I’m here to shake your hand. You saved my son.”

The man’s son, Javier, was a success story from the first year of Patterson High’s Truck Driving Program, a one-year elective class that’s part of the school’s broader supply chain and logistics program. Javier excelled in the program in his senior year, and he now works as a professional driver for a local fleet. “He’s the youngest driver they’ve ever hired,” says Dein. “Taking the trucking class turned his life around. [The fleet] told me they want more Javiers. He’s hard working, dedicated and a great employee.”

Though Javier was the only student of the first year’s seven enrollees to move into a driving job, the program has gained momentum. Backed by support of local and national fleets and the school’s superintendent, Patterson High’s program uses ATS driving simulators and a J.J. Keller textbook to lay the groundwork for earning a CDL. Students who complete the program are able to immediately apply for a commercial learner’s permit and begin behind-the-wheel training in a standard CDL training program.

The school year that just ended was the second year of the program, and 16 Patterson High students were enrolled — up from just seven the year prior. Ten of those 16 completed the program, and enrollment is slated to grow again next year, with 24 students enrolled already. What’s more, other schools are eyeing implementing a program similar to Patterson’s. Representatives from Denver’s Unified School District visited Patterson High this year and toured the facilities over two days. “I’ve had five or six schools contact me in just the last few months,” says Dein.

He’s working to make the program simple to implement at other high schools by creating a packaged curriculum, he says, which he’s calling Turn Key Education. “We can come in and in a period of a week or two bring in the technology, the curriculum, train the instructor and have these programs up and running.”

The Patterson program was Dein’s brainchild. He worked as a truck driver — then a driver manager at Frito-Lay — in the late 1980s and into the 2000s, and he still maintains his CDL. He also ran a non-profit truck driving school for several years, focusing on bringing in people post-prison to teach them how to drive and help with job placement.

Broadening the reach of the high school program “could have a huge impact on the driver shortage,” says Dein. “There are 20,000 public high schools [in the U.S.]. It doesn’t take that many [students] from so many high schools to have a big impact.” Schools are also able to apply for federal grants to launch a similar program, says Dein, which is how Patterson funded the purchase of its driving simulators.

The first year, the 2017-2018 school year, the program’s seven students were shuffled in by counselors, says Dein, simply to get the program up and running. Those students had “pretty severe discipline issues,” says Dein, and the school was “looking for a place to put them.”

“It turned out it was the best place for these students. It wasn’t a traditional [classroom] setting. I had no discipline issues last year,” says Dein, noting he saw a “transformation” in some of them.

Since that first year, “there’s been a buzz in the atmosphere,” says Dein. “Trucking is in now.”

In the school year that just ended, the program had its first female enrollee, and Dein was able to drum up enough money to send her to this year’s Women in Trucking conference. For the upcoming school year, seven female students are enrolled, says Dein.

In addition to classroom learning and simulators, students are also exposed to physical education aspects via a partnership with Worklete, a coaching and training provider for labor intensive industries. The students learn proper body movement and exercises for trucking-specific tasks, such as cranking landing gear, entering and exiting the cab, tips on sitting for long periods and more.

“This is real physical education for high school students that will apply functionally to what they do in life,” says Worklete’s John Post. “Not only are students learning how to move and set themselves up to have a healthy, long career, but they actually come out of this program as certified Worklete champions,” says Post, meaning they’re certified to coach others on Worklete techniques. The certification also boosts their ability to land a job, says Post.

The Worklete training is an element of the program’s push to be interactive, says Dein. “When I first started in 1988, no one taught me the proper way to  pull a fifth wheel handle or open the hood,” he says. “They don’t have any bad habits” to unteach, Dein says of the students. “They pick it up much faster than I do. Even today, I had students on the truck, and I heard a student saying ‘three points of contact!’ Power stance!’ They’re totally engaged.” 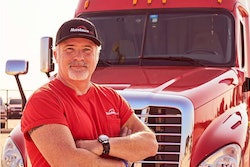 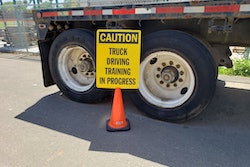