James Jaillet, CCJ executive editor
Sep 5, 2019
After hearing lengthy testimony from small fleet owners and independent contractors operating in the state of California, the California Air Resources Board on April 25 amended its emissions regulations deadlines for those that couldn’t financially comply to the original Truck & Bus rule requiring all 2006 model-year and older trucks be retrofitted with diesel particulate […]

Still in the works in the California legislature is a bill that trucking groups say will likely kill the leased owner-operator model in the state, though time is waning for the state’s lawmakers to clear the legislation this year.

The California legislature has a little more than a week — until Sept. 13 — to pass the bill this legislative session. Otherwise, the legislation would be on hold until next year.

The bill, A.B. 5, targets the use of independent contractors (such as owner-operators who lease on to motor carriers) in the state, taking a broad swipe at worker misclassification across all industries. However, trucking groups based in the state argue its an overly broad swipe that blocks motor carriers from hiring owner-operators. The bill also threatens to upend the business models of ride-sharing companies like Lyft and Uber.

In its current form, “A.B. 5 would put…legitimate owner-operators out of business,” says Chris Shimoda, head of government affairs for the California Trucking Association. CTA opposes the bill in its current form, since it doesn’t include an exemption for trucking — and it appears unlikely that such an exemption will be added to the bill. The Western States Trucking Association has also been a vocal opponent of A.B. 5 and the criteria it establishes for determining a truck driver’s employment classification.

A.B. 5 would make the ABC test established by the California Supreme Court the state’s law for determining a worker’s classification — employee or independent contractor. The court’s ruling, issued in April 2018 in the case of Dynamex vs. Superior Court (which has colloquially become known as the Dynamex decision), established a three-prong test for determining whether a worker is a contractor or a company employee. The sticking point for trucking is the B prong, which states that contractors can’t be involved in the same business as their hiring entity, effectively barring carriers from contracting with leased owner-operators who own their own truck but haul under other carriers’ authority.

The Dynamex ruling has already prompted many carriers to cut ties with their owner-operators in California, out of fear of facing lawsuits over misclassification. Notably, earlier this year, Swift ended its arrangements with California-based owner-operators.

It’s unclear whether A.B. 5 will prevail this session, Shimoda says, though it advanced from the committee level to the floor of the state’s Senate this weekend. CTA intends to continue to press California lawmakers to find a solution that both “resolves the issue of worker misclassification  and allows true owner-operators to continue to work,” Shimoda says. “We will continue to be opposed to the bill until there’s a pathway for legitimate owner-operators” to do  business in the state, he says.

Jason Geller, an attorney for firm Fisher Phillips and the managing partner at the firm’s San Francisco office, said trucking industry stakeholders in California are “yearning for some clarity and direction” on the issue in the wake of the Dynamex decision. However, he said he’s “bearish” on the prospect of trucking being granted an exemption to the bill’s ABC test criteria, should A.B. 5 pass.

“On the other hand, it’s still in the throws of negotiation,” and the exemptions within the bill “may ultimately be  broadened,” he said. “It’s a very fluid situation. Depending on the state of  the negotiations, it may be tabled  until next year. We really are waiting with bated breath” to see what unfolds, Geller says. 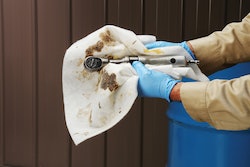