Let the sunshine in: Use of solar can boost efficiency

One of the quickest ways to reduce operating costs is to get the energy trucks need for free. No one’s giving away diesel fuel but integrating solar power – and capturing free sunlight – is one way to conserve it while simultaneously upgrading your battery system.

eNow Vice President and Chief Technology Officer Bob Doane says it’s difficult to calculate how much sun exposure a truck will need to see an improvement in energy usage due to a number of factors.

“… Geographic location, total wattage of the solar system (higher is better), type of charge controller (MPPT is superior to PWM), battery state-of-health, type of batteries (flooded lead-acid or AGM), number of batteries (four for electric APUs, up to three for liftgates), other charging sources (like an alternator or trailer charger) and the power demands of the application (HVAC and hotel loads require more power than telematics),” he said. “Most applications will see a reduction in operating and maintenance costs, however based on the factors noted above the rate of payback will vary from a few months to a couple of years. And after the payback is reached, the savings go right to the company’s bottom line and run for many years.”

Last year, the North American Council for Freight Efficiency released a report on the use of solar in trucking, finding the most common application for panels today comes in support of auxiliary climate control and in-cab power systems that reduce the need to idle the engine during extended down periods.

NACFE Executive Director Mike Roeth noted battery HVACs were a viable anti-idle solution, but often don’t store enough power to get a driver all the way through an off-duty period, “depending on his/her need for electricity,” he said. “Solar could be a way to help them get all the way there.”

“One of the most significant opportunities for solar is to extend the capabilities of battery-powered APUs, which struggle to last the entire duration of a driver’s 10-hour rest period, especially in hot, sunny weather,” Kroes said. “Solar panels are very effective at offsetting reduced runtime because they add additional power back into the system. Solar panels ensure all batteries become fully charged to ensure the APU will provide its maximum potential during the next rest period.”

Solar panels utilized in support of a battery system also help extend the life of the batteries, which was one of the key benefits the NACFE noted in its report.

“Properly designed solar systems constantly monitor battery voltage and battery temperature, and charge the batteries based on that data,” Doane said. “This ensures the batteries are maintained in an optimal state-of-charge and not under or overcharged.”

Kroes noted early battery failure usually happens when batteries sit in a deeply discharged state, such as when equipment is parked for extended periods over a long or off-duty weekend.

In its report, NACFE found another benefit of solar came from avoiding emergency roadside assistance and downtime associated with dead batteries.

“Other cost savings include reductions in penalties for late deliveries and municipality anti-idling fines,” Doane added.

The top of the trailer is generally not an area prone to impact, but low-hanging limbs, snow and ice removal equipment and the like are eventually going to scrape their way across. Most quality solar panels have a protective outer layer to guard panels from tree branch scratches, water, snow and ice.

“Should there be damage to an individual cell, from a sharp object for example, it will not affect the rest of the cells in the panel,” Doane said, noting there are 72 cells in eNow’s 310W panel.

Kroes said solar panels designed for the transportation industry also tend to me thin and flexible.

“Fleets can install them against the curve of a roof fairing on a truck,” he said, adding Thermo King ThermoLite panels are peel-and-stick, so no holes need to be drilled during installation.

Kroes and Doane agree that the panels themselves are largely maintenance-free aside from an occasional washing, or dusting to remove ice or snow.

“Dust and dirt only marginally reduce output, so cleaning is not required, and the system components are designed to never need maintenance or replacing,” Kroes said.

“If snow has accumulated on top of the solar panel, the preferred method of cleaning it off is to use a brush or broom,” Doane added. “Once the solar panel is exposed to the sun, it will warm up and tend to melt further accumulation, under one inch.”

Use of overhead truck snow rotary brush removal devices. Doane said, normally will not hurt the panel but he recommended the panel be inspected after the first use of an overhead snow removal device to ensure compatibility. 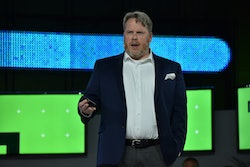 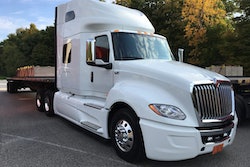 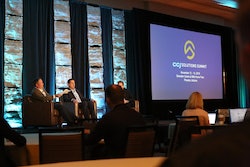