ATA sues ocean carriers over alleged Shipping Act violations
The American Trucking Associations has filed a complaint with the Federal Maritime Commission against a number of foreign-owned ocean shipping lines, alleging that they violated the Shipping Act by requiring carriers to use specific default chassis providers and denying motor carriers the right to select the chassis provider for merchant haulage movements.

ATA’s Intermodal Motor Carrier Conference (IMCC) says “unjust and unreasonable conduct” resulted in trucking companies and their customers for intermodal chassis at ports being overcharged by as much as $1.8 billion over the last three years.

“For more than a decade, these foreign-owned companies have worked together to take advantage of hard-working American trucking companies,” said Bill Sullivan, ATA’s executive vice president for advocacy. “By denying truckers choice of equipment providers at port and inland locations, these unscrupulous companies have been forcing American truckers and American consumers to subsidize their costs to the tune of nearly $1.8 billion—over the last three years alone. This must end, and after several attempts to come to a mutually beneficial resolution, we are now asking the FMC to resolve it.”

IMCC sent a Cease and Desist letter to OCEMA in May, but the issues raised were not addressed, ATA says.

“By denying motor carriers their choice of chassis provider to haul goods in and out of ports, OCEMA’s overseas members have held U.S. motor carriers hostage and forced them to subsidize the shipping lines,” said Randy Guillot, ATA Chairman and president of Triple G Express and Southeastern Motor Freight. “So far OCEMA and its members have rejected all of our attempts to reach a fair and equitable arrangement, but we believe they’ll have less success ignoring the FMC.”

In its complaint, which can be read here, IMCC outlined a number of ongoing violations of the Shipping Act and is seeking injunctive relief against OCEMA and the shipping lines.

The firm reports a 56% year-over-year increase in theft activity, coupled with an 80% increase in value.

“One significant note is that April, which was at the height of the supply chain disruption caused by COVID-19, experienced more than double the volume of April 2019 (+109%). While both May (+31%) and June (+30%) also beat their 2019 totals, it was by a decreasing amount in each case,” SensiGuard said in its 2020 second quarter cargo theft analysis.

In total, SensiGuard recorded 227 cargo thefts in the second quarter, with 96 of them occurring in April, 67 in May and 64 in June. The average theft value per incident during the quarter was $219,364.

Miscellaneous products were the most stolen product type during the quarter, representing 23% of all cargo thefts. These products mostly consisted of mixed loads, which SensiGuard says typically hold a variety of cargo for mixed retail stores. Food and drinks were the next most stolen items, accounting for 20% of all thefts.

Notably, for the first time since the third quarter of 2017, California was not the top state for cargo theft. Texas took the top spot in 2020’s second quarter, accounting for 24% of the nation’s thefts. Texas was followed by California, Illinois, Florida and Tennessee.

Within these states, the most prevalent locations for thefts were unsecured parking lots, identified in 86% of incidents in which a location was noted.

HireRight adds COVID-19 testing to services
Background check and drug screening company HireRIght announced this week it is now offering COVID-19 screening to carriers in the U.S. to help companies make decisions about bringing employees back to the workplace.

HireRight customers can now order a COVID-19 antigen test through the HireRight platform. The test detects the presence of coronavirus in the saliva of the test taker. When tests are ordered, they are sent directly to employees, who will self-administer the saliva test, then mail the specimen to an accredited lab in provided postage-paid packaging. Final test results will be reported to both the employer and the employee.

“As businesses look to reopen their workspaces and begin a return to more normal operations, their success depends on their ability to create an environment that prioritizes the health and safety of their employees and customers,” said Guy Abramo, CEO of HireRight. “HireRight’s goal has always been to help businesses mitigate the inherent risks that come with hiring and employing a workforce. As COVID-19 has shown, those risks can change rapidly from one day to the next, and we will continue to ensure our background screening solutions evolve to meet employers’ needs.”

Navistar joins electric vehicle group
Navistar on Thursday announced its membership in CharIN E.V., a global group of industrial and automotive companies focused on the adoption of electric vehicles through the development, promotion and implementation of the Combined Charging System as the global standard for charging battery-powered electric vehicles.

The OEM previously participated in the program but was not a member.

“Navistar is proud to officially join CharIN and to continue working with the companies within it to set the industry standard for electric vehicles moving forward,” said Bob Walsh, vice president, Emerging Technology, Strategy and Planning. “We look forward to participating in important discussions and providing our unique perspective within the electric space to help set a standard that is necessary for electric vehicle adoption.” 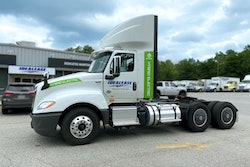