Rep. Jesus “Chuy” Garcia (D-Illinois) first introduced the legislation, dubbed the “Improving National Safety by Updating the Required Amount of Insurance Needed by Commercial Motor Vehicles per Event (INSURANCE) Act” in 2019, but it never advanced past the House Transportation Committee.

While the text of the reintroduced bill is not yet available, the original bill called for motor carriers’ minimum insurance levels to be raised from $750,000, based on medical-cost inflation.

The bill would also require the Department of Transportation to adjust the liability minimum every five years.

The American Trucking Associations said it believes any changes to the liability minimum should be made following stakeholder input and opposes arbitrary increases.

The Owner-Operator Independent Drivers Association and other trucking groups have long been opposed to increasing the insurance minimum for motor carriers. More than 60 trucking-related organizations penned a letter in February to the House Committee on Transportation and Infrastructure to discourage any attempts to increase the minimum.

“Increasing the liability requirement will not make highways safer, is wholly unnecessary and would have a severe negative impact on small-business truckers, farmers and manufacturers,” OOIDA said in a statement Friday morning.

The Truck Safety Coalition and trial lawyer group American Association for Justice are among groups that have voiced support for Garcia’s INSURANCE Act.

In addition to the pay increase, AFC has also purchased more than 60 new trucks, including new Peterbilt 579, 567 and 389 trucks equipped with Cummins engines, and new Reitnouer flatbed trailers.

Naramore has been a truck driver for nearly 40 years and has driven for Buchheit for more than 12 years. He has driver more than two million accident-free miles throughout his career.

The MoTA Driver of the Year award is presented to a driver who has been awarded a Driver of the Month award in the same year. Drivers are chosen for their outstanding performance and dedication to safety. 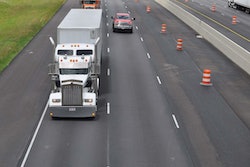